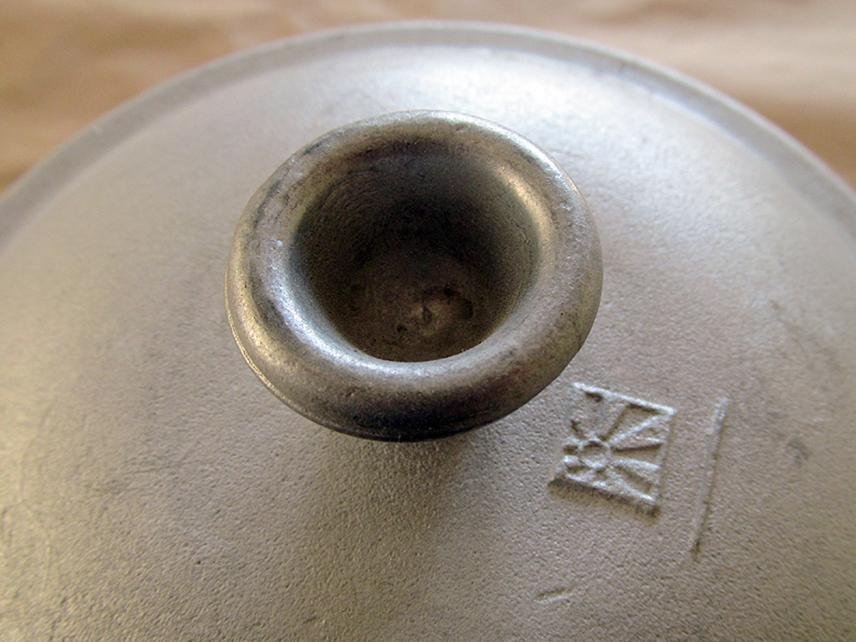 Artmet - Cauldrons and other Aluminum Dishes Made in Moldova

The Artmet Company produces cauldrons of different sizes, from the smallest ones – for 0,75 liters, to big ones – for 25 liters.

The Artmet Company from Chișinău is the only Moldavian manufacturer of aluminum dishes such as cauldrons, frying pans and pots. The food safe aluminum alloy the Artmet Company uses to make its products is bought in Russian Federation. It is paradoxical the fact, the only rivals Artmet has on the local market are the Russian manufacturers of aluminum dishes.

“There is also a suitable brand of the aluminum alloy in Romania. But it's still more profitable to buy it in Russia, even taking into account the further transportation”, says the foundry foreman Prascovia Ababii. The imported aluminum has the form of small ingots. Those are melted in big electric ovens, after which the metal is pressed to take the form of pots and cauldrons.

The company is sorely lacking in skilled casting workers

The readers, especially those who use the cauldrons, would be curious to find out, that there is only one casting worker in Moldova.

“There are few persons in Moldova, which would have the required specialty”, says Prascovia Ababii. “We are looking for specialists by using all possible methods: ads in “Makler”, on the Web-sites and at labor markets. But in one year we found only one specialist. There are some casting workers in the country. But we need a person, which would be able to work manually and to feel the metal”.

There are two big electric ovens in the workshop. The metal melts at the temperature of 720-740 degrees Celsius. The casting worker scoops the melt and pours it into the mold. 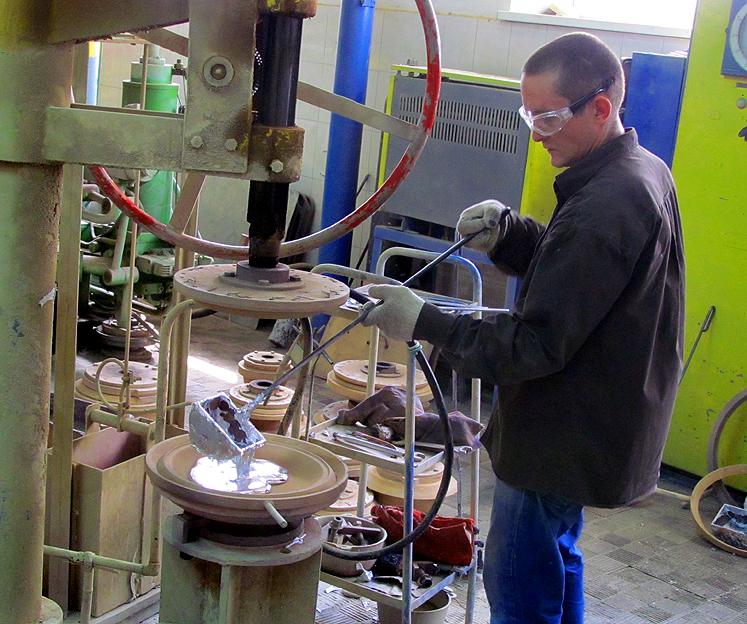 Then the master rotates manually the big wheel and activates the press. As it fast falls down, the press covers the hot metal, while the excess flows from the taps. In one minute a new cap is made. The master manually moves the still hot product to other caps.

And in one shift the worker can make 200-250 caps. During one month the workshop produces 1200-1300 aluminum cookware sets. One set includes a cauldron or a pot with a cap.

“It's not enough”, says Prascovia Ababii. “The demand is higher. If we had one more specialist, we would work in two shifts”. In this case the volume of production would increase and the casting workers would have bigger salaries, as the company would be able to save on ovens' heating. 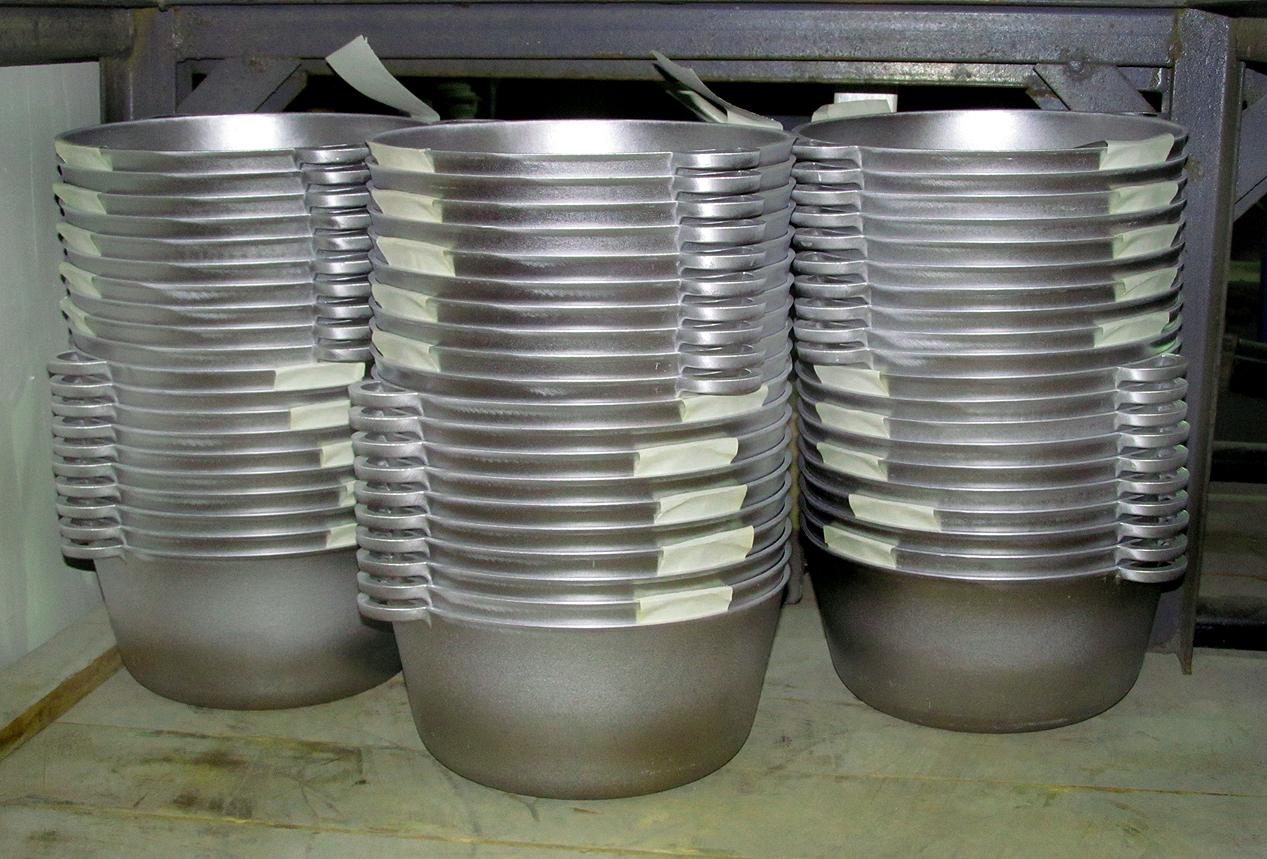 The workshop produces cauldrons of different sizes, from the smallest ones – for 0,75 liters, to big ones – for 25 liters. There are also some pots for 2, 6 and 10 liters and only one type of pan with the diameter of 30 centimeters.

The small and medium cauldrons and pots have a steady demand during the year. But the surge of interest appears for the big ones in autumn, when it comes the time for home canning. “They are bought immediately, we do not have time to produce them”, says Prascovia Ababii. 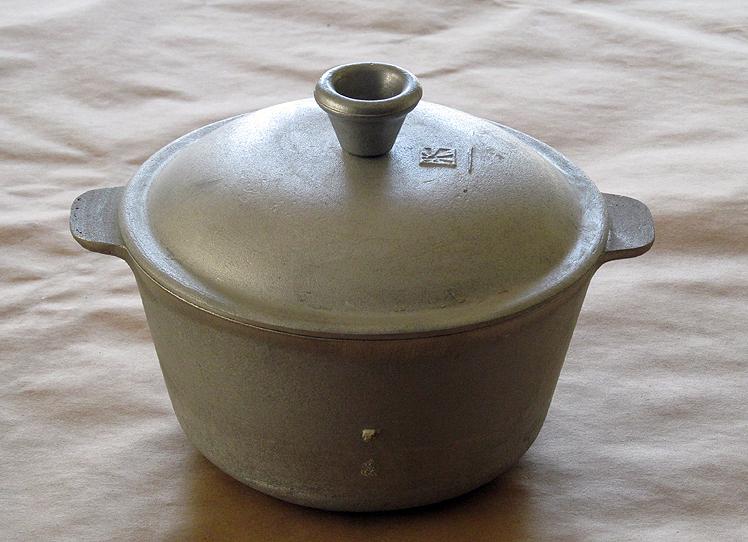 As if to prove the fact, the reporter was taken to the finished goods warehouse. The shelves were empty and just in some corners few cauldrons were placed. But they will not last there for a long time, as in few days the cauldrons will be transferred to the wholesale buyer from Cimișlia. Instead, in summer and winter the warehouse is filled with pots and cauldrons. “Sometimes we have to keep them on the floor”, the storekeeper breaks into the conversation. And if the workshop did activate in two shifts? “If it worked like this, we would always find some more place for our goods”, says Prascovia Ababii.

There are indeed few masters, so the company already plans to buy an injection molding machine to produce the dishes in it. Beside the machine, the firm will also need to buy some forms and melting pots. But, probably, the technology will be bought, if it appears to be profitable. Because today it's much easier to buy a molding machine, than to find a good specialist.