The Hottest Peppers in the World and their Classification. Varieties of Hot Peppers Grown in Moldova

Hot peppers are members of the nightshade family, Solanaceae, along with potatoes and tomatoes. They can be consumed in raw form, as a powder (paprika), are used in various dishes, and are usually the ingredient that gives dishes more flavor due to their hot taste.
Now they are grown all over the world, however, the homeland of hot peppers is Mexico, while India is the main producer, consumer and exporter of this product.

Hot peppers have a low calorie content, but are rich in antioxidants, vitamins and minerals. They contain calcium, iron, magnesium, potassium, sodium, vitamin C, vitamin B6, folate (a natural form of vitamin B9), as well as niacin, thiamine and riboflavin, active substances that act as antioxidants.

An important component of peppers is capsaicin, a substance responsible for their hot taste. Capsaicin is an alkaloid that has many beneficial properties for the body, especially for muscular and cardiovascular system. Capsaicin acts as an antioxidant, a vasodilator, can increase the amount of gastric juice, has an antibacterial effect and can lower cholesterol, as well as blood pressure. It is used in various creams for external use to reduce pain in certain areas of the body, especially rheumatic pains. This substance also reduces appetite and promotes the burning of fat within 30 minutes after its consumption.

SHU (Scoville Heat Unit) is a scale used to measure the heat of a pepper, which is proportional to the amount of capsaicin contained in it. For example, bell pepper does not contain capsaicin and on the Scovilla scale it has 0 SHU.

At the moment, the sharpest pepper in the world is called Carolina Reaper, which is the result of a cross between Pakistani Naga and Red Habanero. It has 2.2 million SHU. 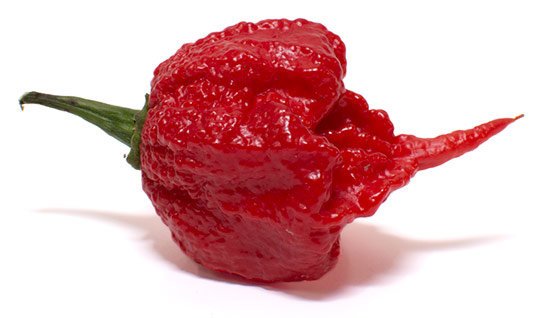 Interestingly, the spray used by law enforcement are also classified using Scoville scale. They have an equivalent of capsaicin of 1.5 to 2 million SHU.

The most popular hot peppers and their classification according to Scoville Heat Unit: 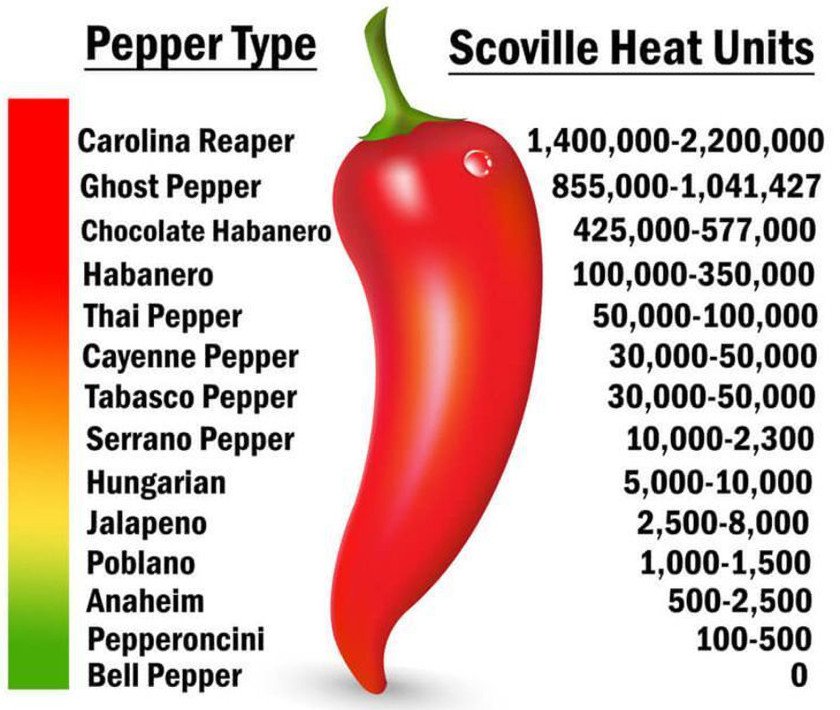 Hot peppers can also be classified according to color; they can be red, green or yellow.

Cayenne pepper is an exotic species that is most often sold in form of powder. It has its own unique taste, it is used to add piquancy and spice to dishes.

Anaheim pepper has a reddish-orange color when ripe, but it is also consumed in green. It has a thick crust and is suitable for baking and for preparing hot dishes, because it does not break. It is sold in dried form and used in chili powder.

Scotch Bonnet is the main ingredient in traditional Jamaican dishes. It is considered one of the hottest peppers in the world, but its aroma also has sweet notes.

Habanero pepper is grown in South America and has floral notes. It is used in salsa recipes and marinades. On the Scoville scale, it has from 100,000 to 350,000 units.

Thai chili or Bird’s Eye is popular in Asian cuisine. It is consumed raw or used in fish sauces, salads and curry pastes.

Fatalia pepper is of African origin and has the same hotness as Habanero. It has a citrus flavor and a thin crust; it is used in salsa recipes and in hot sauces.

Poblano pepper is from Mexico and it is the main ingredient of a traditional dish made with chili and stuffed meat called chile rellenos.

Jalapeno pepper are grown in Spain and Mexico and has a fleshy texture similar to sweet peppers. It is used in various traditional dishes, especially in salads.

Serrano pepper is also from Mexico and is hotter than jalapenos. It is consumed, both raw and in various traditional dishes.

Growing of hot pepper in Moldova

In our country, hot peppers are grown mainly in households and can be bought mainly in agricultural markets. However, there is a producer in Moldova, which grows about 200 varieties of pepper gathered from around the world. Sergiu Turcanu from Chisinau, seven years ago decided to start growing decorative peppers in flowerpots and in a greenhouse. In his collection there are varieties of pepper of all shapes and colors.

He says that Moldovans only grow one type of pepper, Capsicum Annum, but he is the first in the country to deal exclusively with four more species that are new to Moldova: Capsicum Baccatum, which offers very tasty varieties of pepper, such as, for example, Bishops Hat; Capsicum Chinense, a species characterized by very hot peppers such as Habanero and Carolina Reaper. The third type is Capsicum Pubescense, peppers from the Andean Mountains, resistant to cold, with larger, juicier and softer fruits than other species, and Capsicum Florescence, of which Tabasco pepper is the most popular.

Sergiu Turcanu also works on crossing peppers varieties and managed to obtain a new variety certified in Moldova. It is called "ecoVazon Sangria", a perennial ornamental plant that forms thin conical fruits that ripen from purple or green-purple to orange and in the end, turn red.

The entrepreneur grows peppers in flowerpots, prepares oils, powders and canned products. One can find his products at the EcoLocal fair, which takes place every Saturday in Chisinau.