Shepherd’s pie is a traditional English dish, made with a thick layer of mashed potatoes instead of dough. The pie is characterized by the fact that the filling is placed first into the baking dish and then covered by the mashed potatoes mass.

The filling of a classic pie consists of minced meat and vegetables stewed in a sauce, usually tomato sauce or gravy. This pie is also a great way to get rid of the remnants of yesterday's dinner or any other ingredients left in the refrigerator.

In our vegetarian version of the pie, instead of meat, we will use beans and oyster mushrooms. 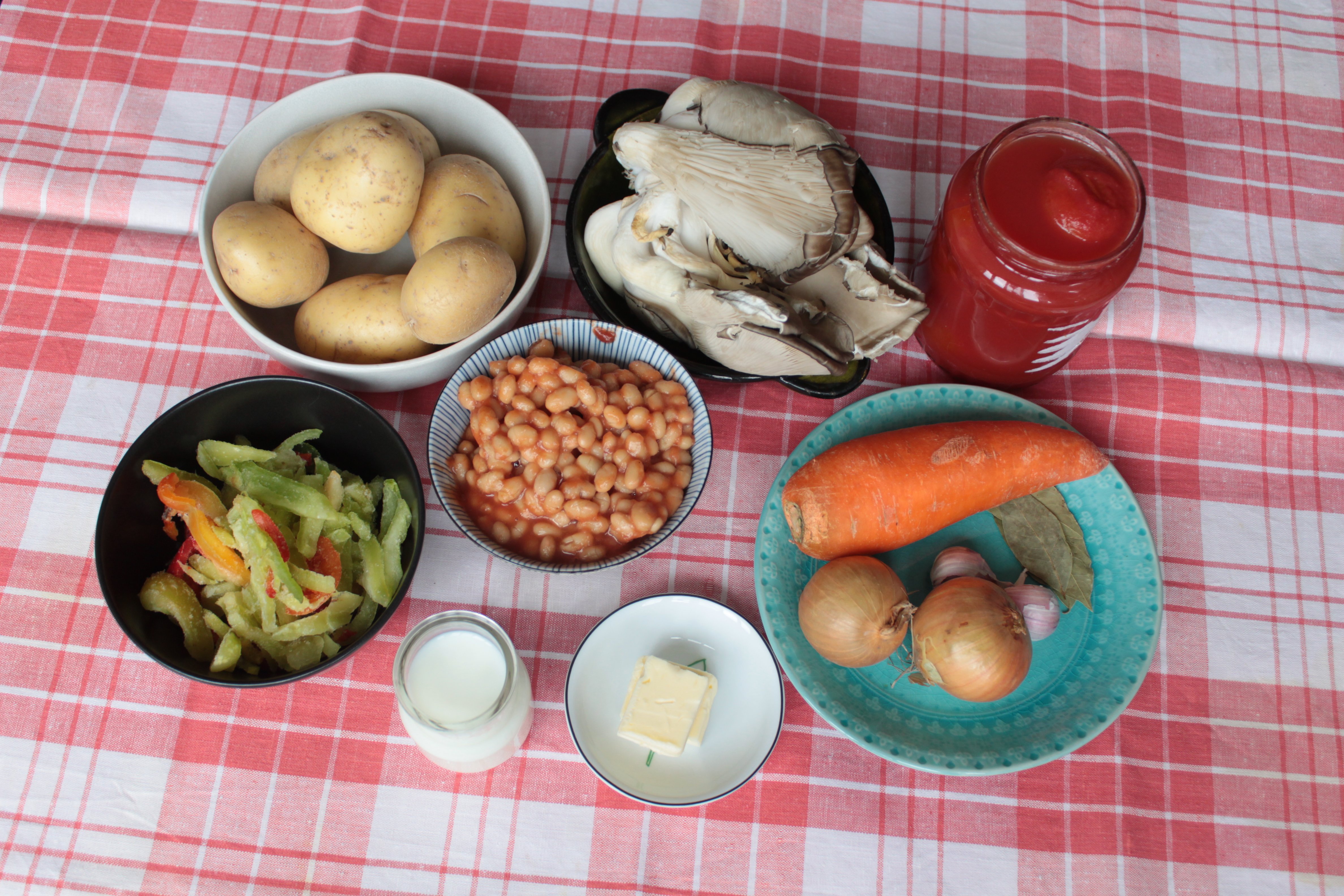 First, peel the potatoes and cut them into small cubes. The smaller the potato, the faster it will boil. Put the potatoes into a medium-sized saucepan and pour cold water. Bring it to the boiling point, put salt and cook it at a medium fire, for 15-20 minutes or until the mass become soft.

Drain the water from the potatoes, then add the butter and milk. Mash the potatoes and let this mas cool a little while preparing the filling.

For the filling, grind the garlic and cut the onions and carrots into small cubes. Put them in a large pot, on a slow fire with a small amount of oil. Stew the vegetables on medium heat, without spices, stirring them occasionally, for about 10 minutes or until they become soft. It is important not to let the vegetables burn or turn to black, as the pie can aquire a bitter taste.

While the vegetables are stewed, cut the mushrooms into small slices.

Depending on the season, we can use frozen of fresh peppers (capsicums), that should be cut into small strips.

After 10 minutes, add mushrooms and peppers to the vegetables in the pot, stir everything thoroughly, and continue to stew for 10-15 minutes or until the mushrooms are ready.

After 15 minutes, add the beans, canned tomatoes, bay leaves, salt and pepper, then add a glass of water. Stir everything thoroughly, bring to a boil at a higher heat, and then let this mass boil for 10 minutes or until the water evaporates and the sauce thickens.

Preheat the oven to 180 degrees. Grease a large baking dish with butter. Put the whole filling into the dish and distribute it evenly. Then, using a tablespoon, spread the mashed potatoes on top of the filling over the entire surface of the dish. With the back of the spoon, gently smooth the mashed potatoes into an even layer. Then, take a fork and draw several lines over the mashed potatoes to create a beautiful pattern.

Bake everything for 20-25 minutes or until the mashed potatoes have a golden-brown color.