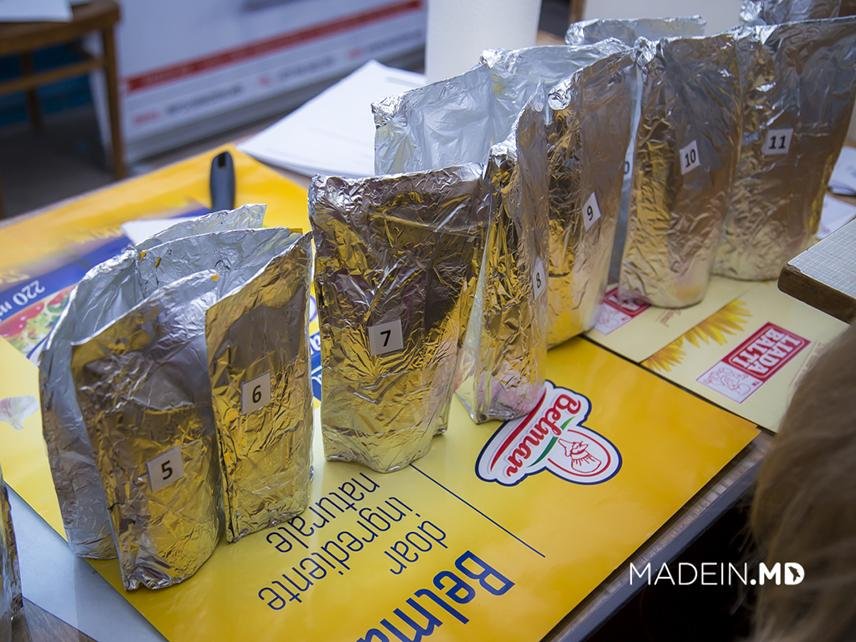 MadeinMD Gathered all Domestic Producers of Mayonnaise Made in Moldova for the Sixth Edition of the Blind Tasting of Local Products. PHOTO

On analyzing the results of the tasting sheets of 18 participants, the first three places were occupied by moldovan brands Liada Provencal Elite, Liada Classic and Belmar Classic.

MadeinMD continues its social campaign for the promotion of domestic products - "Taste for 7 times, choose once". After the blind tastings of the apple juice, ice cream and beer, mineral water and wine made in Moldova, this time participants had the opportunity to taste rhe mayonnaise made in Moldova. The tasting took place at the Technical University of Moldova, Faculty of Food Technology, Lab 309, and the head of the department faculty, as well as the students offered all necessary accomodations for the organization of the event. The role of tasters was given to the students of the Faculty of Food Technology, to a part of volunteers who signed up for tasting in advance, to Aneta Zasavitchi, President of the National Association of Restaurants and Entertainment Locations, as well as to representatives of the mayonnaise producing companies.

For the tasting were selected 8 kinds of mayonnaise from three local companies, as well as three types of imported mayonnaise (made in Russia and Ukraine). The event was held in a warm and friendly atmosphere, representatives of all three mayonnaise producing companies attended the tasting. They offered the audience interesting information on the production process and the main problems faced in promoting and marketing of their products on Moldovan market. As in previous editions, the main purpose of the event was the promotion of Moldovan brand of mayonnaise, taking into account that consumers are hardly aware of the domestic producers of this product. This fact can be proven by a video report, organized by MadeinMD on the eve of tasting, in which the majority of surveyed people had practically no knowledge of Moldovan mayonnaise brands.

For the mayonnaise tasting there were invited two moldovan bread manufacturers and namely SRL Brutaria Ivlev, from Cioreşti village, Nisporeni, a company that produces baked goods on the basis of traditional Moldovan ingredients and using modern German technologies. For the tasting, this bakery has provided us with high-quality white flour based bread and bran braided bread. The second manufacturer was the company SRL Sapte Spice, which provided for tasting white flour based bread and rye bread.

After the speech of Mr. Ion Ivlev, from SRL Brutaria Ivlev, who spoke about his bakery, it came the turn of representatives of mayonnaise producing companies to present their production.

Alimcom Company operates on the Moldovan market for many years, since Soviet times. Currently Alimcom only produces two types of products: mustard and mayonnaise. A company representative told the audience that Alimcom mayonnaise is made from natural ingredients, of domestic origin, without the use of preservatives or stabilizers. For the tasting, they provided the only brand manufactured in present by the company - the mayonnaise Provensal. This product is more or less known to consumers in Chisinau, as it can be bought in most shops and supermarkets of the city.

Liada Nord is a company from the northern part of Moldova that is active since 2001 and produces mayonnaise, mustard, tomato, vinegar and ketchup. The mayonnaise from Liada Nord is made using and european recipe and modern technologies, and currently the company offers several types of this product, taking into account the market demand. With the development of the production line of mayonnaise, Liada Nord began to specialize in the production of dressings for salads and other dishes. This manufacturer is less known in Chisinau, but it's quite popular in the northern part of the country, although in recent years its sales suffered a mall descrease. Liada Nord produce mayonnaise in several types of packaging: plastic bags, glass jars and buckets for larger quantities. The company also offers sauces and mayonnaise for the network Andy's Pizza. And despite the fact that the company has captured 80% of the market of northern Moldavia, in the southern and central regions, especially in Chisinau, Liada Nord is unfamiliar to consumers and is still in the process of promoting their products in the supermarkets of Chisinau. For tasting, the company offered four types of mayonnaise: Provensal, Elite Provensal, Homemade and Spicy.

The company SC Sta Interterm from Balti with the brand Belmar exists since 1999 and offers a wide range of alimentary products. The most famous brand of mayonnaise from Belmar is Provansali, quite popular in the north, but less known in the southern and central parts of Moldova. Belmar Mayonnaise is made from natural ingredients, and besides that product, SC Sta Interterm offers two types of ketchup, vinegars and several types of margarine. In recent years, the company's products began to appear more frequently in the stores of Chisinau and there was a significant increase in sales t in the southern and central regions of the country. SC Sta Interterm offered for tasting three types of mayonnaise: Belmar Provansali, Belmar French Provansali and Belmar Classic.

The import brands presented for thе tasting were: Моя Семья (Russia), Торчин (Ukraine) and Мечта Хозяйки (Russia) dute to the fact that these three bbrands are sold in almost any store or supermarket in Chisinau and Moldova.

Mayonnaise Tasting and its Results

Prior to the tasting, Artut Macari, the Head of the Department of Food Technology of the Technical University of Moldova spoke about the criteria that should be taken into account while tasting mayonnaise, which were included in the evaluation sheets: color, appearance, aroma and flavor, taste and consistency. Commercial view could not be evaluated because the tasting was blind.

Thus, 11 types of mayonnaise with bread were tasted and evaluated by students and other participants of the event. After that, the organizers showed the participants the package and everyone had a chance to see what product they tasted and liked the most.

Analyzing the evaluation sheets of 18 participants, the first three places were occupied by brands Liada Provencal Elite, Liada Classic and Belmar Classic. Lower marks were received by other domestic brands, as well as by the three mported mayonnaise brands.

As well as in previous editions, MadeinMD was able to prove and confirm the abundant presence of domestic producers of mayonnaise on Moldovan market, to inform consumers about less known Moldovan brands and the blind tasting showed that Moldovan mayonnaise got higher ratings than some of the well-known foreign brands .

During the dialogue with local manufacturers, we learned that there are many obstacles for the promotion of Moldovan brands in stores of Chisinau and in the whole country. This is partly due to the specific aspects of local supermarkets policy, as well as due to lack of a functional government programs that would guarantee that local manufacturers could sell their products in any store network of the country.

There were also discussion on the ingredients used in the manufacturing of domestic and foreign mayonnaise. The sweet taste of Ukrainian or Russian mayonnaise is due primarily to a number of experiments that alienate this product from its classic taste, while domestic mayonnaise has a more sour taste, due to the use of vinegar and is closer to the traditional recipe of the mayonnaise. Perhaps this is one of the reasons why the Moldovan mayonnaise took the first three places in the evaluation sheets of the tasters. It is also important that among them were students of the Technical University, future specialists and experts of the agro-food industry in Moldova.