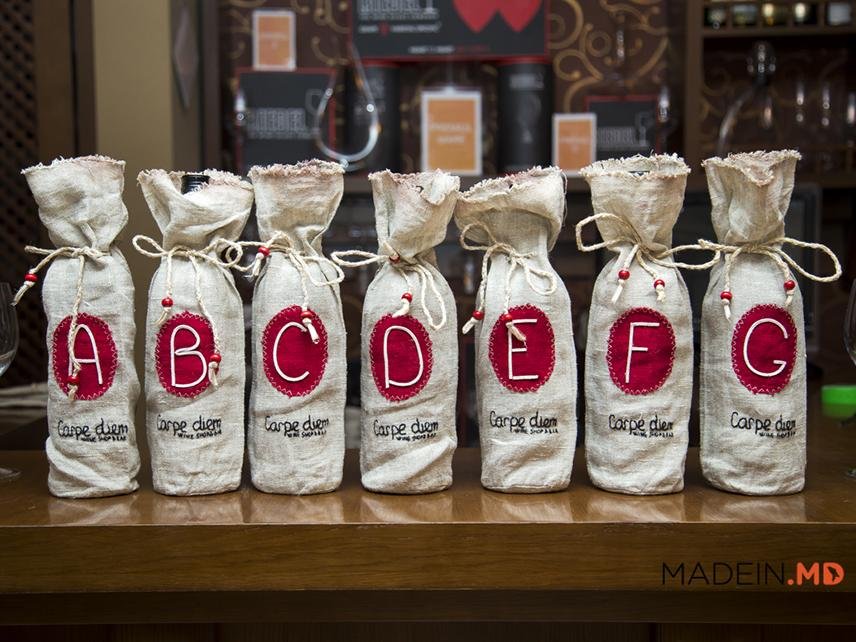 Moldova occupies the leading position in the world regarding the number of vineyards per capita, and the increase in the export of Moldovan wine production is crucial for the economic growth and development of the country.

The MadeinMD campaign "Taste for 7 times, choose once" came to its fifth issue. After tasting of apple juice, ice cream, beer and potable water, this time the vent was dedicated to Moldovan wine. And, since the mission of the campaign is to familiarize consumers with the local products, for the tasting there were chosen only wines made from domestic grapes.

It is known that domestic grapes varieties account for only 10% of the total area of vineyards in Moldova, which occupy about 112 thousand hectares. It seems that the Moldovan consumers are not very familiar with these varieties or with many local producers of wine, which proves and video report made before the tasting. The fact that people know only wine producers such as Cricova, Mileştii Mici or Purcari, when in Moldova there are about 140 wineries, indicates the need for the organization of such an event, which would familiarize the public with a wide range of wines produced that exist in our country. It is important to add that Moldova has the highest density of vineyards in the world, and wine is the most representative moldovan product on international markets.

The tasting took place in the wine house Carpe Diem in Chisinau, and was presented by Mr. Ion Luca, the president of the Small Winemakers Association, a person with extensive knowledge in the field of viticulture and Moldovan wine industry. The wines, chosen for the event were made from five local grapes varieties: Feteasca Alba, Feteasca Regala, Viorica, Feteasca Neagra and Rara Neagra from eight Moldovan wine producers.

The participants of the tasting were people from different categories: wine producers, journalists, bloggers, government officials and representatives of foreign embassies in the Republic of Moldova. The location was very well chosen, as Carpe Diem is an ideal place for the organization of such events.

Before we describe the tasting process itself, it is worth mentioning the local producers, who provided snacks and water for the event. The cheese products were represented by moldovan companies in Moldova Bravi Lacta, Cahul Cheese Factory, Lactalis Alba and Floresti Creamery. In addition, participants had the opportunity to taste dried fruits (apples, pears, cherries, peaches, plums, raisins) from local brands Vine Criza, Monicol and Livada Organică. Walnuts and almonds were provided by the manufacturer Igor Golban from Carahasani Village, Stefan Voda, and the company Ribca's Artisan Bakery provided the tasting with homemade, ecological bread made from wholemeal. Company Vateco Lux offered their water Dobrogea, which, among other things, was one of the most popular on the previous tasting. During the wine tasting, participants tasted the local wines blindly and evaluated them by giving two votes for favorites wines from each category (grapes variety). After that, Mr. Ion Luca revealed the bottles and showed them to the participants, so that everyone can see what theyr tasted. Thus, the participants had the opportunity to draw their own conclusions and to find out what brand of wine they liked best.

The stating started with white wines. First, participants had the opportunity to taste a glass of young wine, made from the new harvest of Feteasca Regala. This wine has just passed the fermentation process. This product has not been evaluated, as it was presented to the public in order to familiarize participants with the taste and aroma of this variety. The real tasting started three wines made from Feteasca Alba - Cricova, 2014 harvest, the wine from Vinăria din Vale, 2013 harvest (which received a silver medal at the international competition Decanter World Wine Awards) and Feteasca Alba 2014 by Carpe Diem. In this category highest markes were given wines from Carpe Diem and Vinăria din Vale.

The last white wine presented for tasting was made of variety Viorica that was created here in Chisinau by the experts of the National Institute of Vine and Wine. This variety can be considered purely domestic, cause it can be found only on the territory of Moldova. The only wine in this category was from Cricova. The first category of red wines, was manufactured from the variety Feteasca Neagra. Thus, the participants had the opportunity to taste five wines - Feteasca Neagra, from Cricova, Chateau Vartely (new brand Individo), 2013 harvest, Vinăria din Vale, Carpe Diem, 2013 harvest and the wine from a small local company Minis Terrios. These wines were decently appreciated by the participants, impressing many of them with pleasant and original fragrance, reminiscent of black currants and plums. Highest rated wines in this category were Chateau Vartely and Carpe Diem.

The last wine of the evening was Rara Neagra. Participants tasted the wine Rara Neagra from Cricova, 2014 harvest, Rara Neagra de Purcari, 2014 harvest and Rara Neagra with the brand Equinox (manufacturer Crama Domnească), the only wine that received the European Eco certificate. In this case, all three wines had similar ratings. Throughout the event, Mr. Ion Luca shared its knowledge and presented many interesting things about each of the 5 varieties, gave tips on tasting and stressed the importance of promoting domestic grapes and Moldovan wines. In the short breaks between tastings, the wineries representatives who were present at the event (Vinăria din Vale, Purcari, Chateau Vartely) offered useful information about the production process and the products of the companies. The deputy director of the National Association of Food Safety, Mr Grigore Porcescu, who was also present at the event, made a speech about the benefits of wine consumption, and also stressed the importance of promotion of domestic products among Moldovan consumers.

In conclusion, the fifth edition of the MadeinMD campaign "Taste for 7 times, choose once" proved to be particularly successful. And despite the fact that wine tastings are frequently organized in Chisinau and in the wineries of the country, such a format that would include the tasting of wines made only from the local grape varieties, is something new and unique. Today Moldova occupies the leading position in the world regarding the number of vineyards per capita, and the increase in the export of Moldovan wine production is crucial for the economic growth and development of the country. At the present stage of globalization, Moldovan viticulture can conquer international markets only through the promotion of domestic grapes varieties and the production of high quality wines.