Production of Domestic Medicines in Accordance with European Standards. A Trip to Balkan Pharmaceuticals Factory. PHOTO and VIDEO

The enterprise Balkan Pharmaceuticals was founded ten years ago. Currently, it produces about 200 names of medicines used to treat diseases of the endocrine, nervous, cardiovascular, respiratory and digestive system, as well as other affections.

One of the most important stages in the history of the company's activity is the building of a new production complex in Sangera. The project is an important Romanian investment in our country and will create more than 400 jobs. The new complex is located on an area of ​​2.5 hectares, occupies a working area of ​​ten thousand square meters and was built in accordance with good practices for the production of medicines (GMP).

The factory has four production lines, and in the near future it is planned to build a new complex for the production of antibiotics. 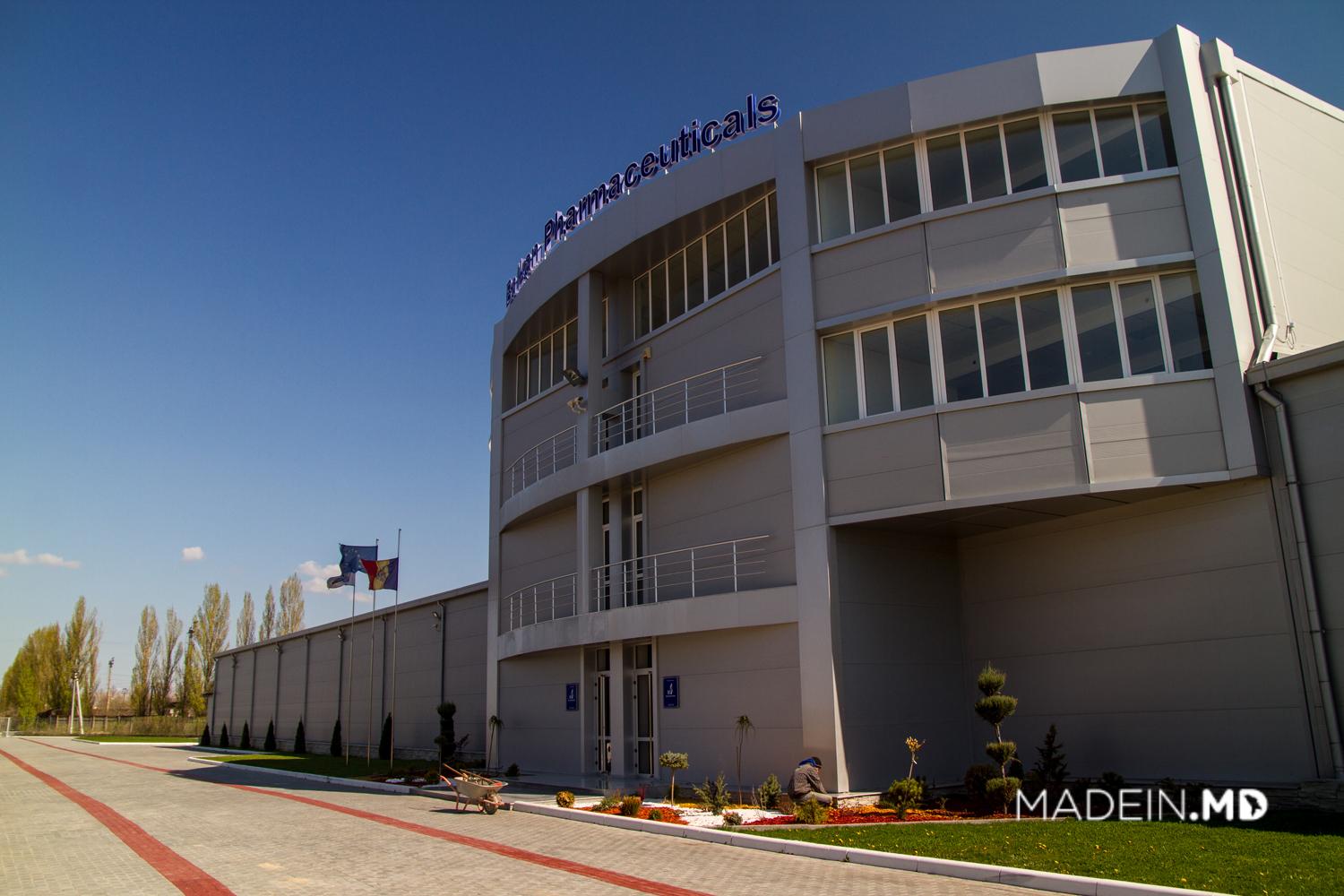 On April 11, Madein.md team visited the new complex and, under the guidance of the company's mechanic, Iulian Buga, we had the opportunity to see in detail all the stages of the production of medicines. This trip is part of a series of excursions that the Madein.md project will carry out on the factories and production units of local companies with the aim of developing industrial tourism in the country. In the future, other visitors will have the possibility to take part in these trips, and thus consumers will have the opportunity to familiarize themselves with the production processes of various factories. This initiative is also aimed at increasing the level of consumer confidence in moldovan companies and products.

The Balkan Pharmaceuticals factory consists of two main departments: production of cytotoxic drugs (antitumor drugs used in the treatment of cancer) production of other medicines. In accordance with the new European GMP standards and for security reasons, these two departments should work independently.

Our tour began in the department of production of cytotoxic drugs. Throughout the corridor, which is designed for visitors, people can see through special windows all the processes taking place in the industrial complex. But, given the fact that the factory has not yet begun its work, our team had a unique opportunity to get acquainted with the production stages not behind the glass, but in the premises themselves, which in the future will be accessed only by the company's employees.

Thus, we had the opportunity to find out how each type of medicine is produced: pills (tablets), capsules and injections (ampoules and vials). 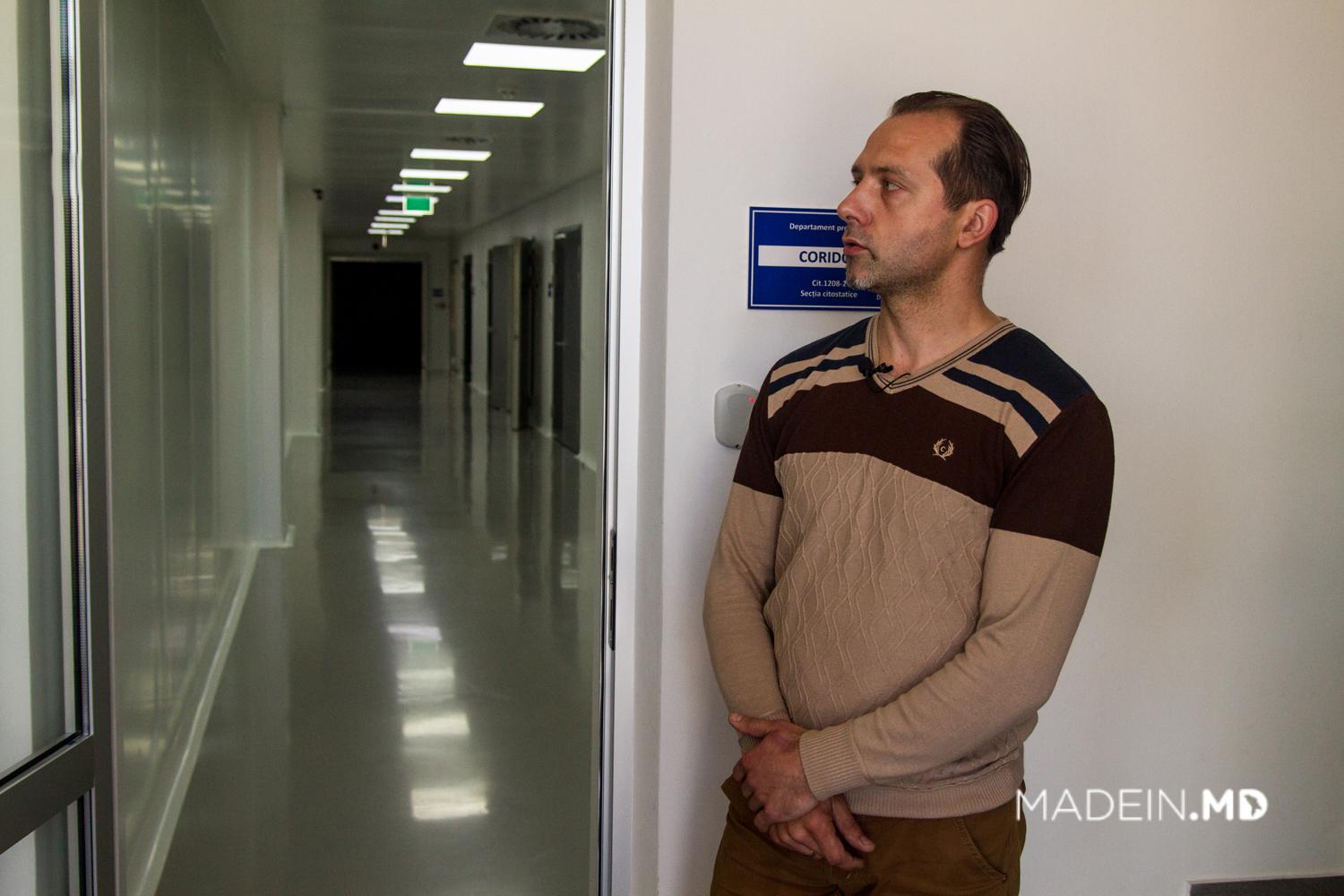 Sterility and cleanness above all

The floor in the production departments is made of epoxy and an antibacterial material specially designed for the pharmaceutical industry. The colors of the floor vary from one department to another, having different classes of cleanness (there are four of them). These classes determine the equipment and access of the personnel to acertain department or production unit . Some of the departments are more sterile, containing a higher air pressure, as modern standards and production rules require it. 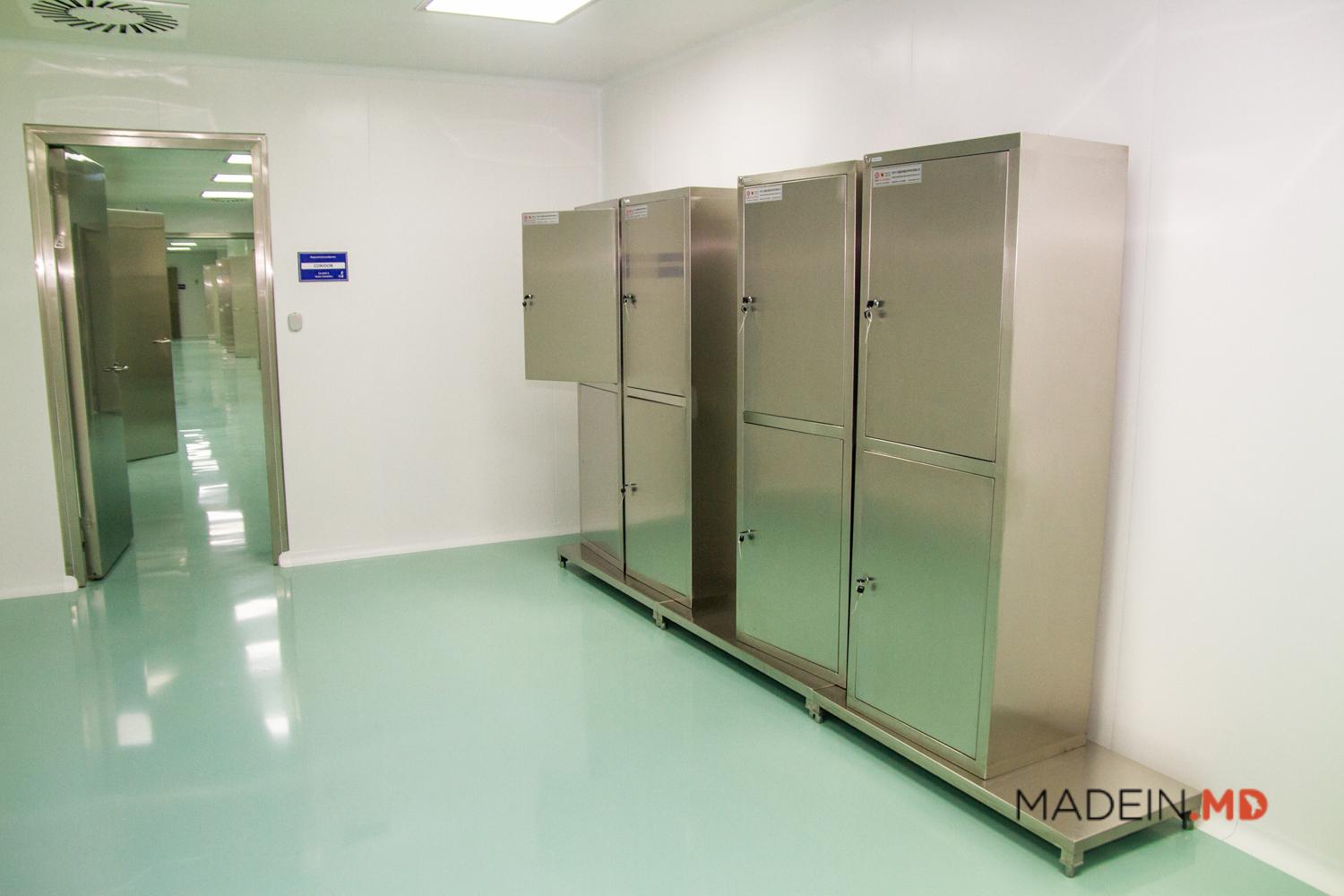 Our tour began in the department where the raw materials is stocked. Here, the quantity that will be used directly for the production of one series is selected (the series is the quantity of a product (for example, 50, 80, 100 kg) approved by the Medicines Agency for subsequent sale.

Then the identification of raw materials is carried out. Representatives of the laboratory conduct a thorough analysis, which takes place in a special extraction box with airflow. Raw materials enter into production batch only after the results of laboratory tests are positive and confirm the fact that there are used the appropriate substances and coefficients. In another room, there takes place the disinfection and weighing on a special apparatus of all raw materials for the production of one series.

Afterwards, our trip continued to the department for the compounding of substances. Here, the substance necessary for the production of the series is formed. It is transferred to the unit where sterile solutions are produced. Also here is a device containing a suction filter, and another which disinfects the container containing the required substance. 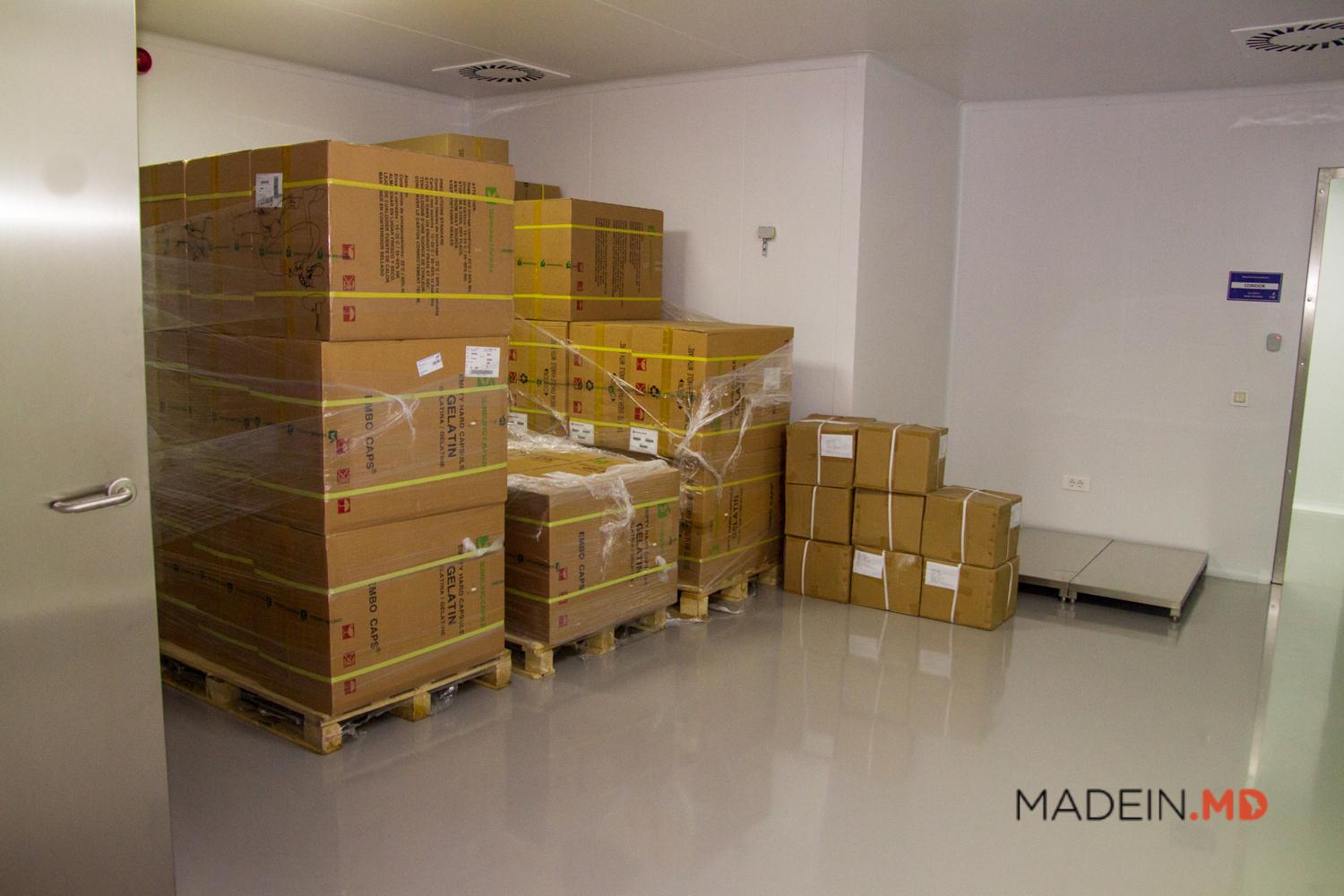 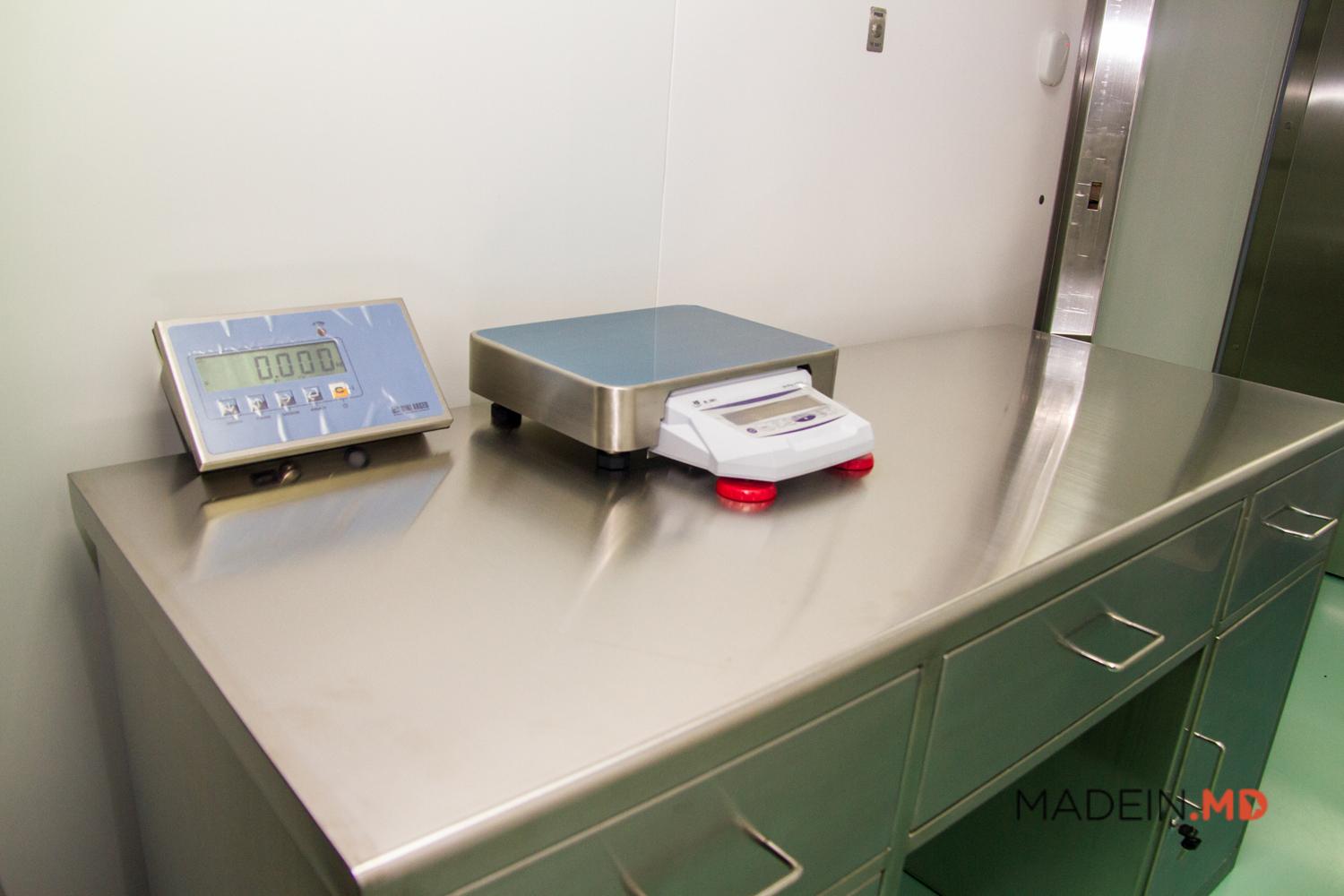 Then comes the department of production of medicines in the form of tablets and capsules. At the first stage, the substance is homogenized with a three-dimensional device. Homogenization is a mixture of all the components required for a single series. There are also certain stages of homogenization, which must be strictly observed, because the concentration of the active substance medicine depends on them. All components that are in the tablets, we can read on the box or on the prospectus, but the stages of homogenization are a commercial secret of the manufacturer. 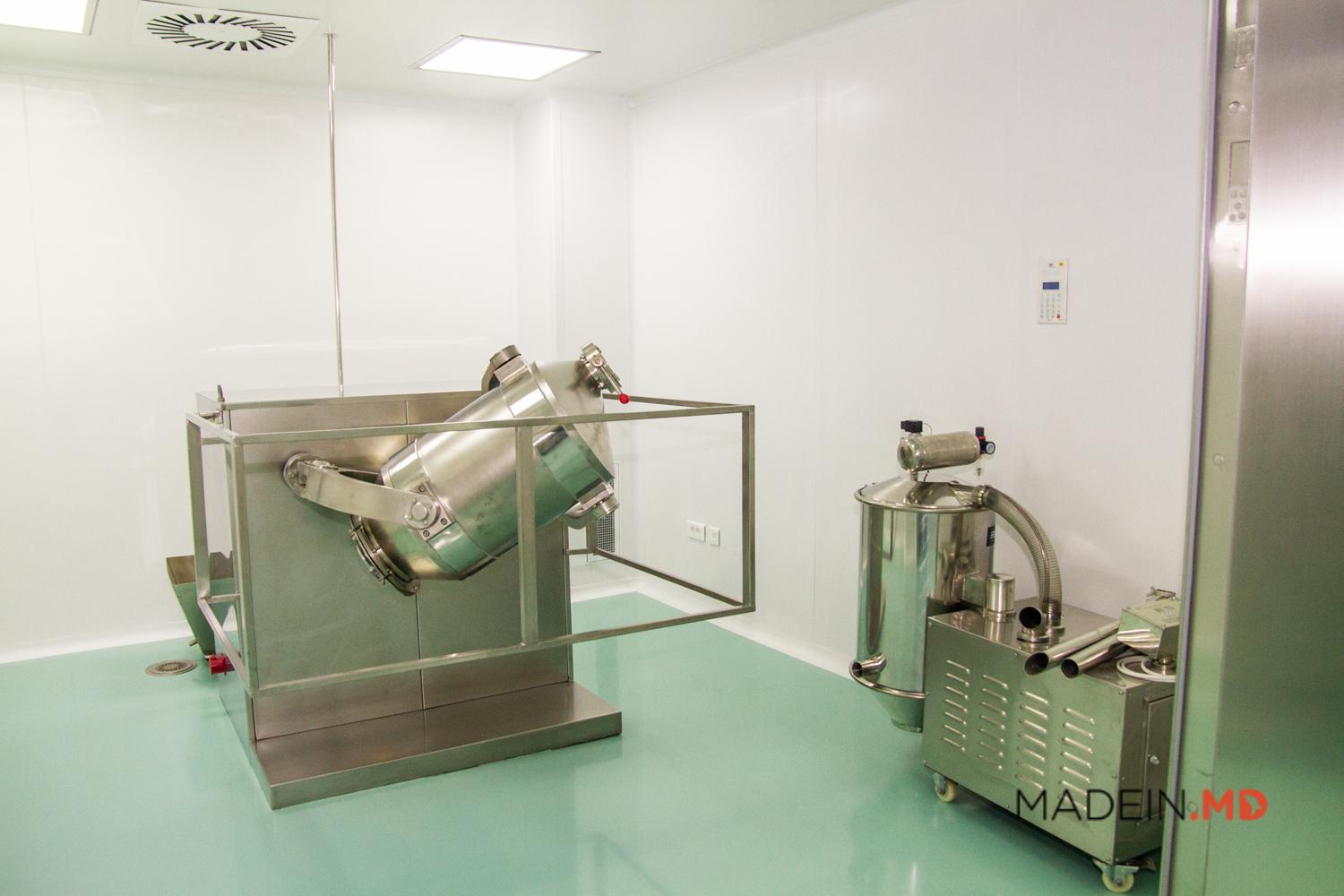 Then we went to the department for the production of capsules. Here takes place an automated process, where the capsule forms are filled with the substance, after which they undergo a process of dust cleaning and sterilization. The production capacity is 36,000 capsules per hour, and only one person is required to operate this device. 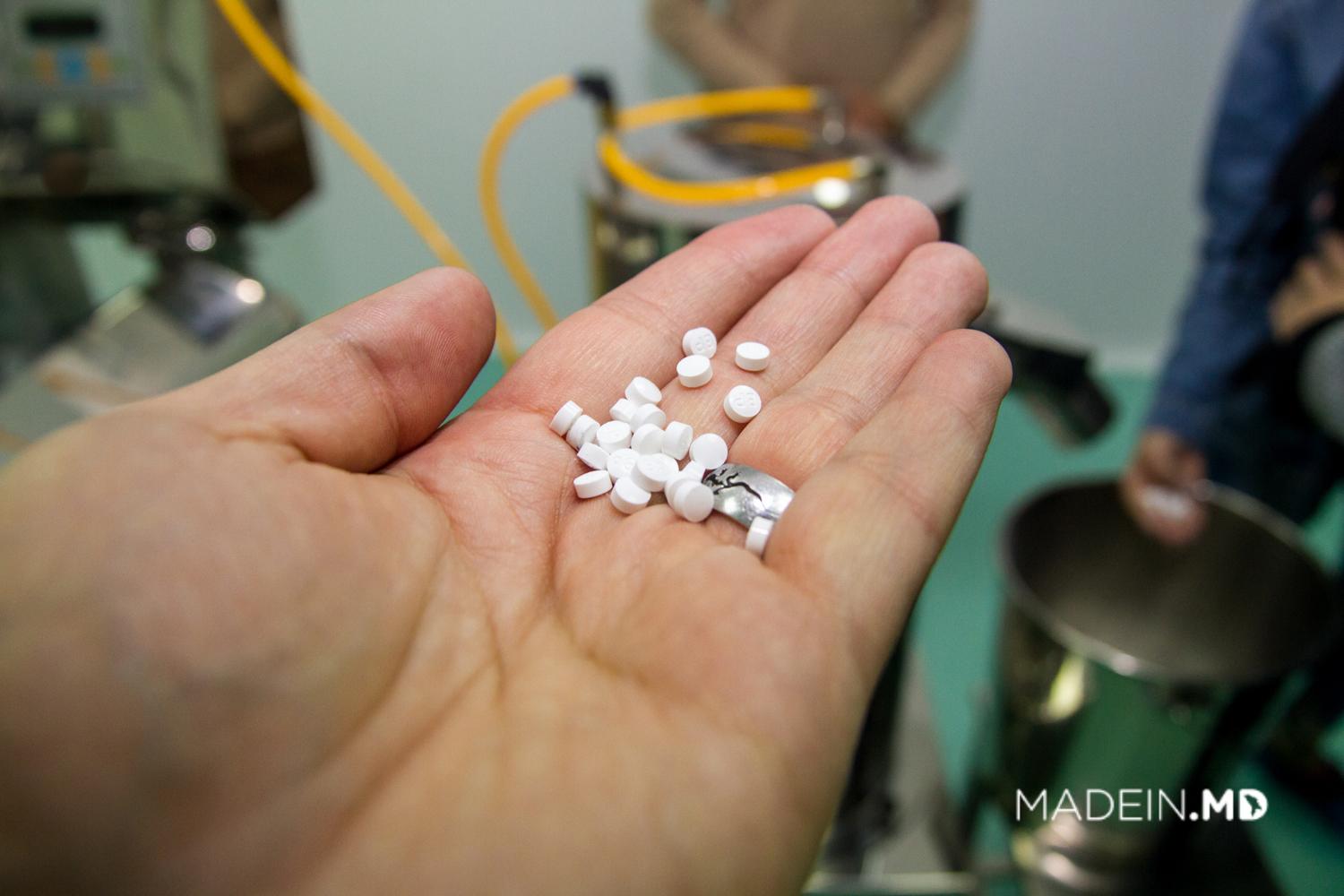 Then take place the packaging stage, which is also an automated process. Here is the dispenser for the distribution of the substance where it is compressed and thus tablets are obtained. They pass through a device called a metal detector. Its presence is necessary according to the new GMP standards and ensures that the tablets do not contain any metal impurities. The company produces round and square tablets, as well as capsules. 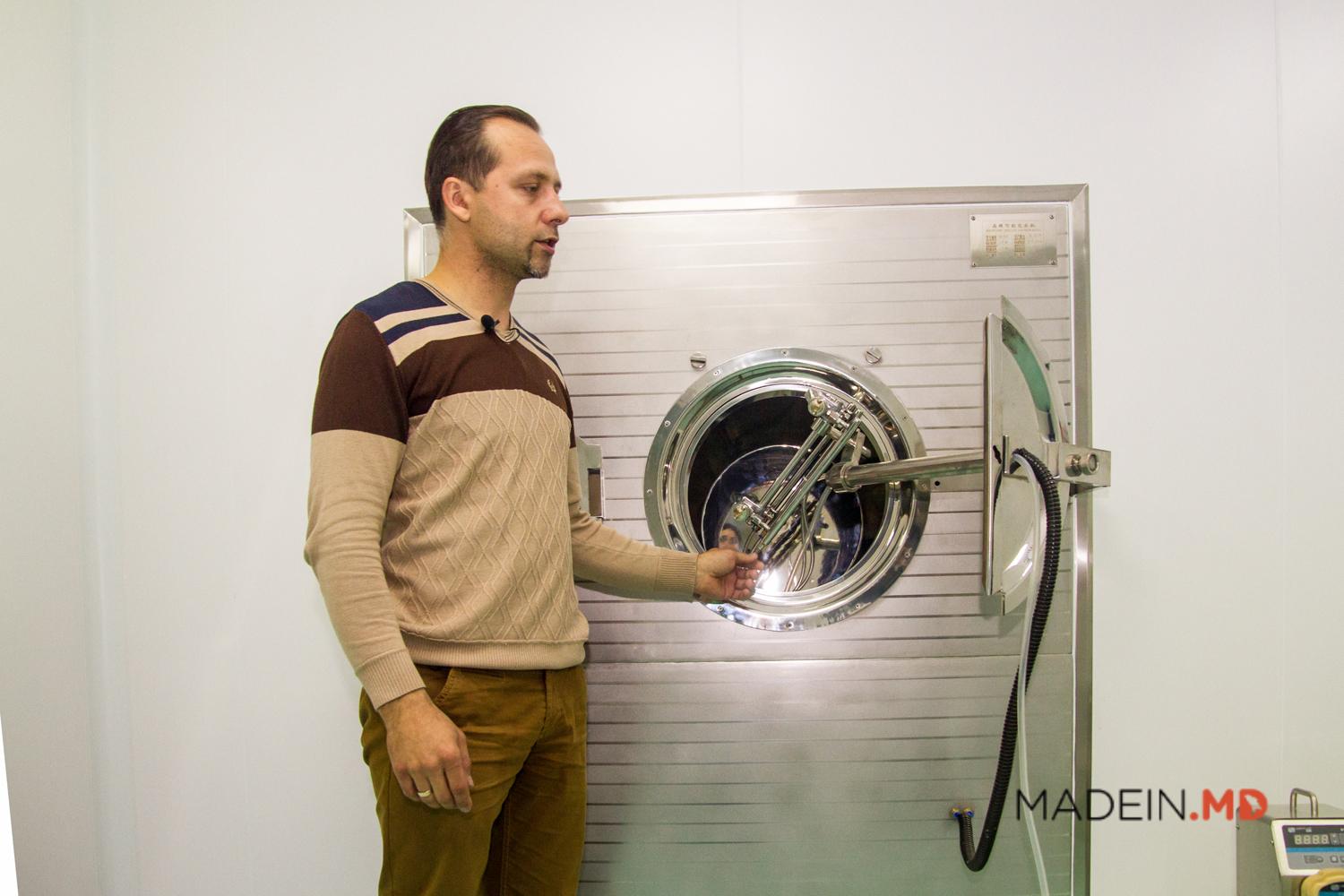 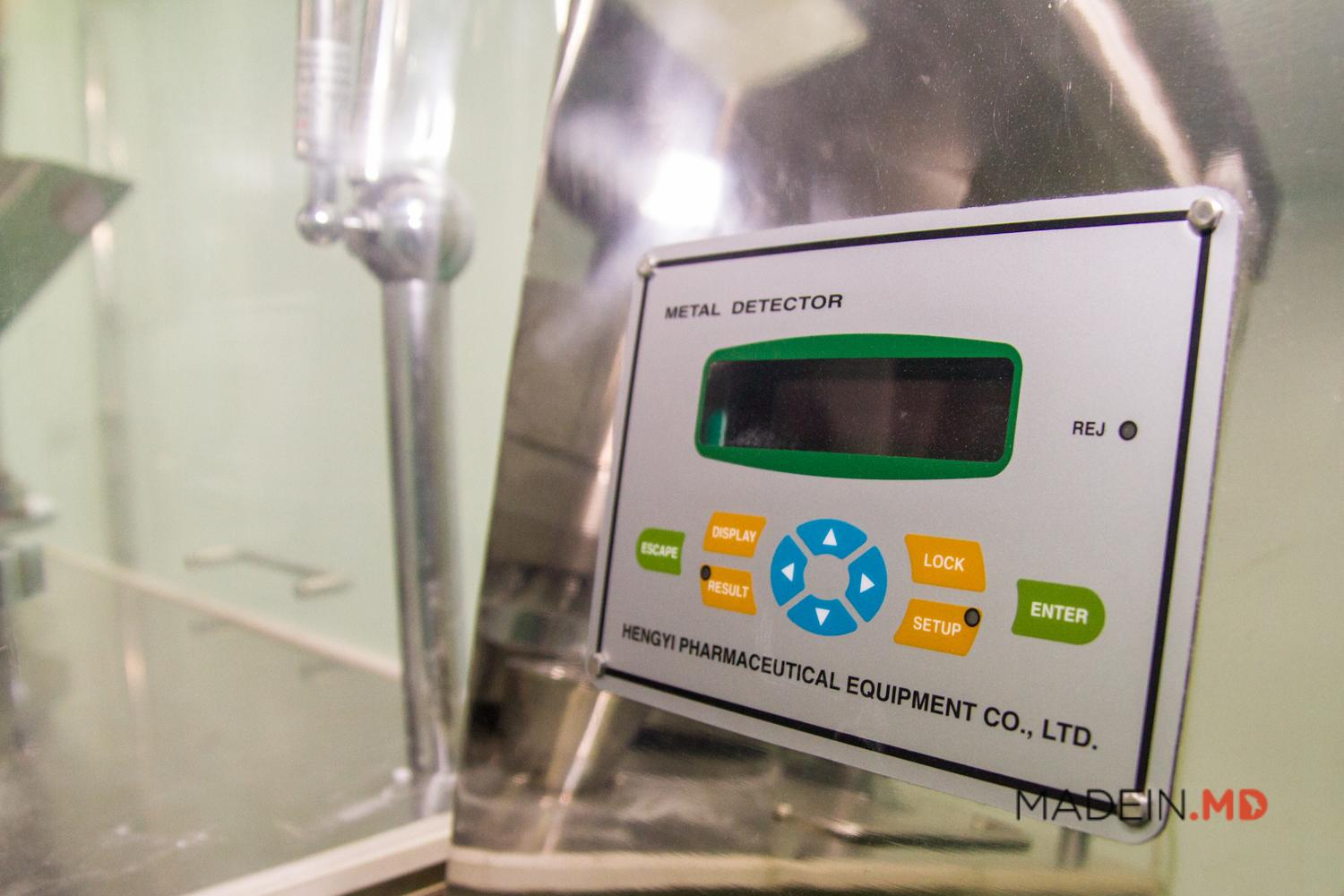 Another important process in the manufacturing of tablets is their coating. In this case, a special substance is applied to the tablets (this usually refers to tablets that are sensitive to moisture, or to protect medicinal substances from oxidation with gastric juice), or they are pollinated with a special solution.

For primary packaging, two types of PVC film are used: smoky and plain white. Tablets are located on a desk, where several brushes distribute them on the film. The whole process is automated. Also here is a sensor that checks if the films are filled with tablets. Then aluminum foil is printed. It contains name of the product, the concentration of the active substances, the name of the manufacturer, etc. Then takes place the process of gluing aluminum film and PVC film under the influence of temperature and pressure. 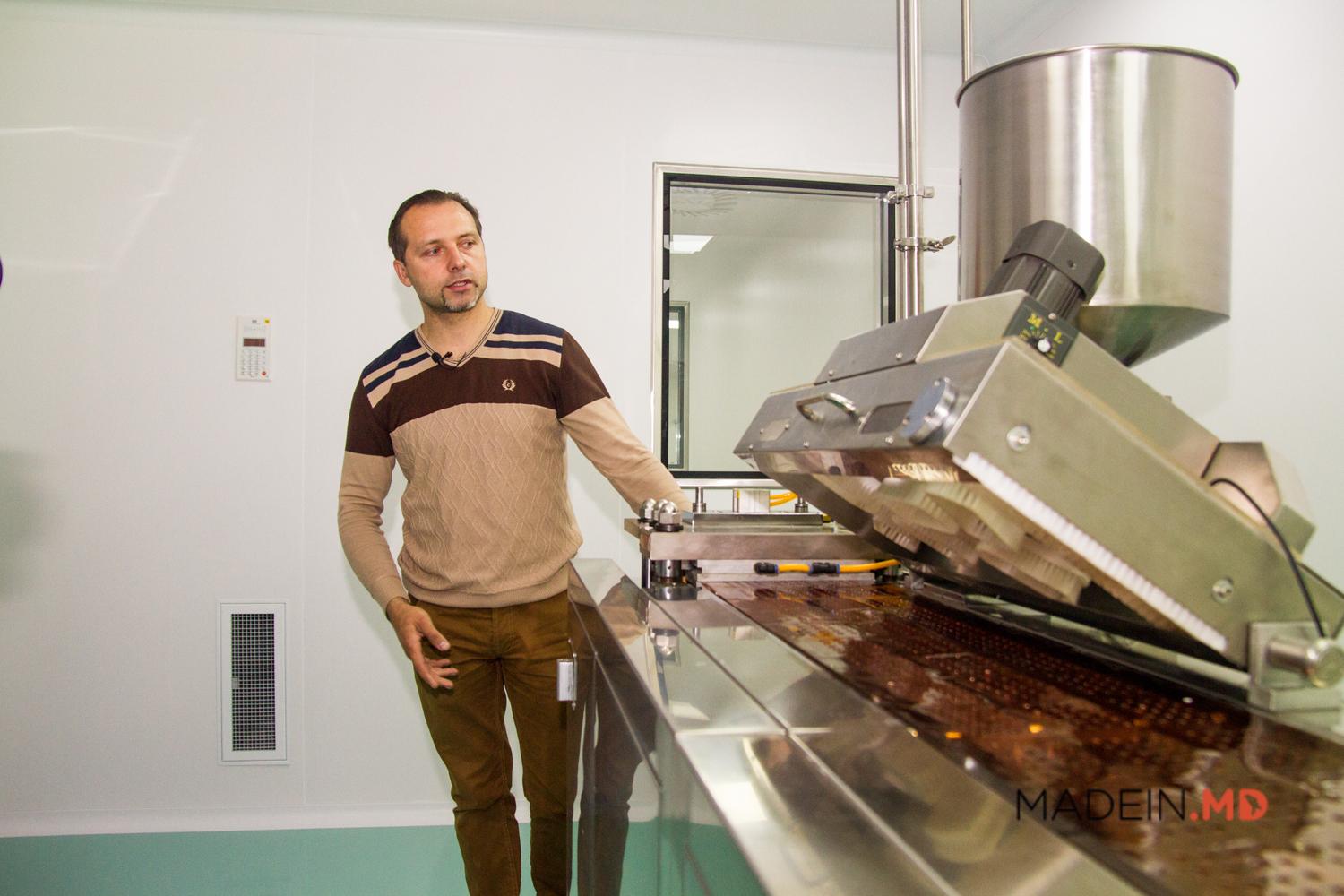 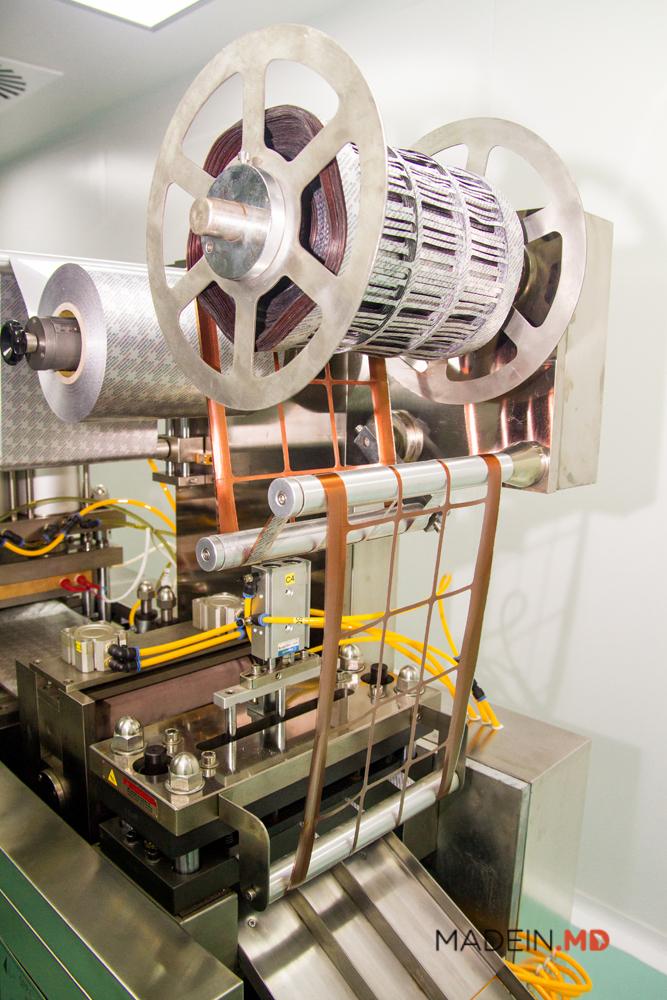 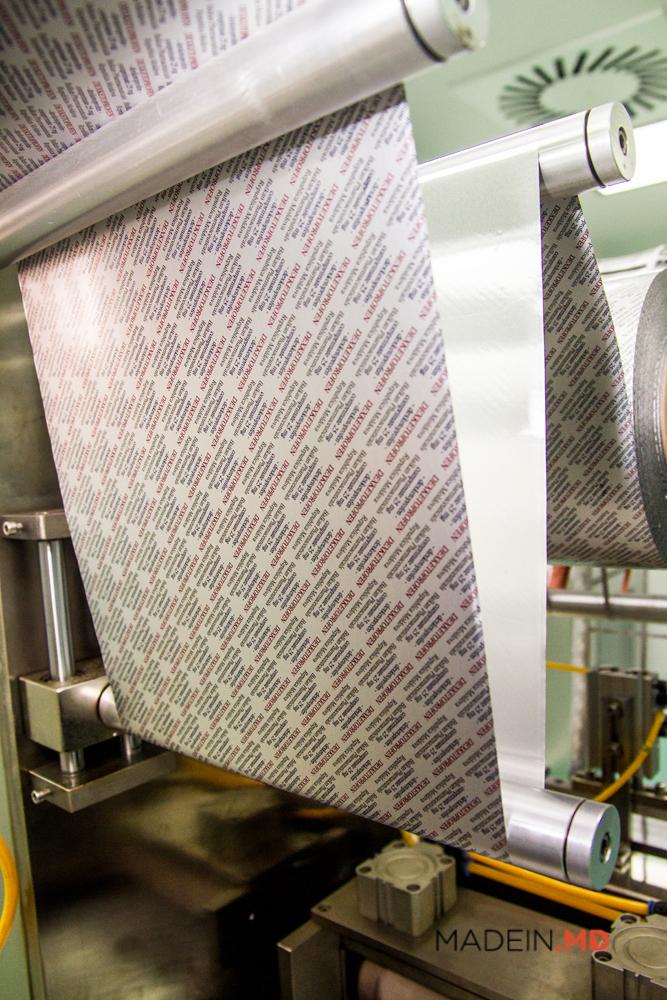 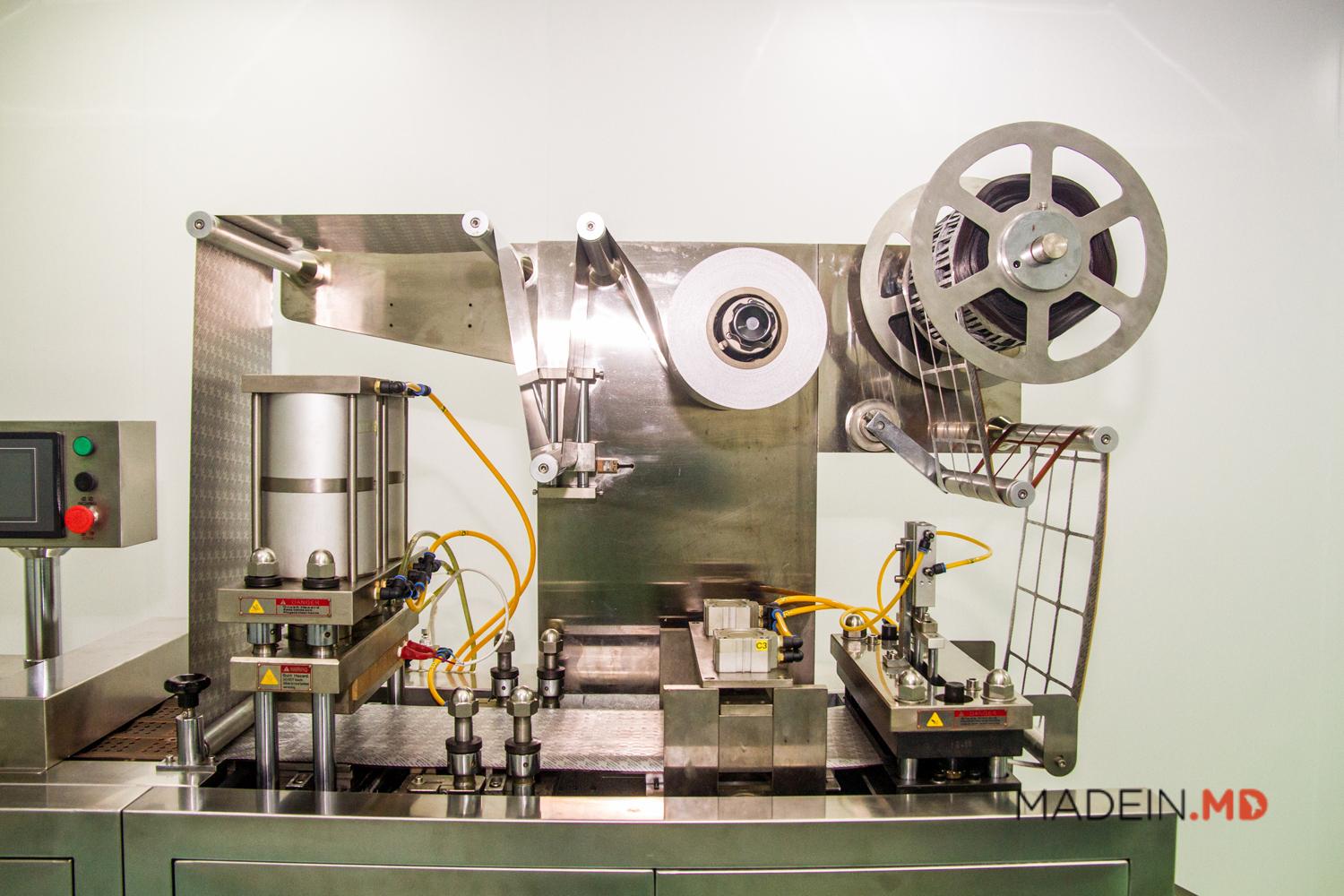 Thus, the tablets form a blister pack, which, in turn, passes through a special device into the department of the subsequent cardboard packaging. Here an automatic packing machine places three blisters and a brochure on a cardboard box. And therefore we have a finished product.

These packages are placed in large boxes that are in quarantine before the arrival of the Medicines Agency. They arbitrarily test several boxes, carrying out the necessary analyzes: concentration, hardness, dissolution, etc. The box also indicates the date of manufacturing and the expiration date of the drug. It is important to note that the production date is the date of the first identification analysis, so it is defined by default. 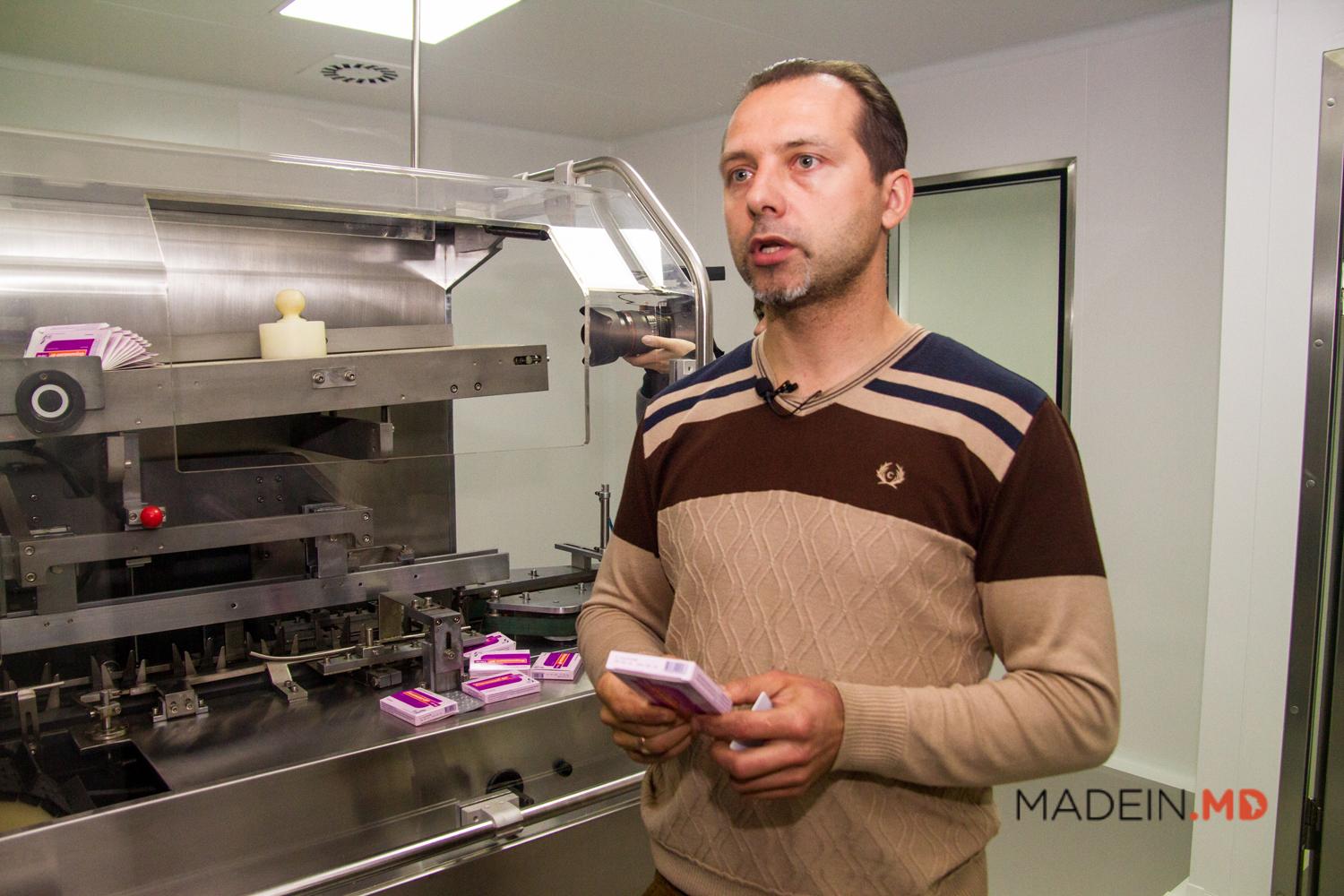 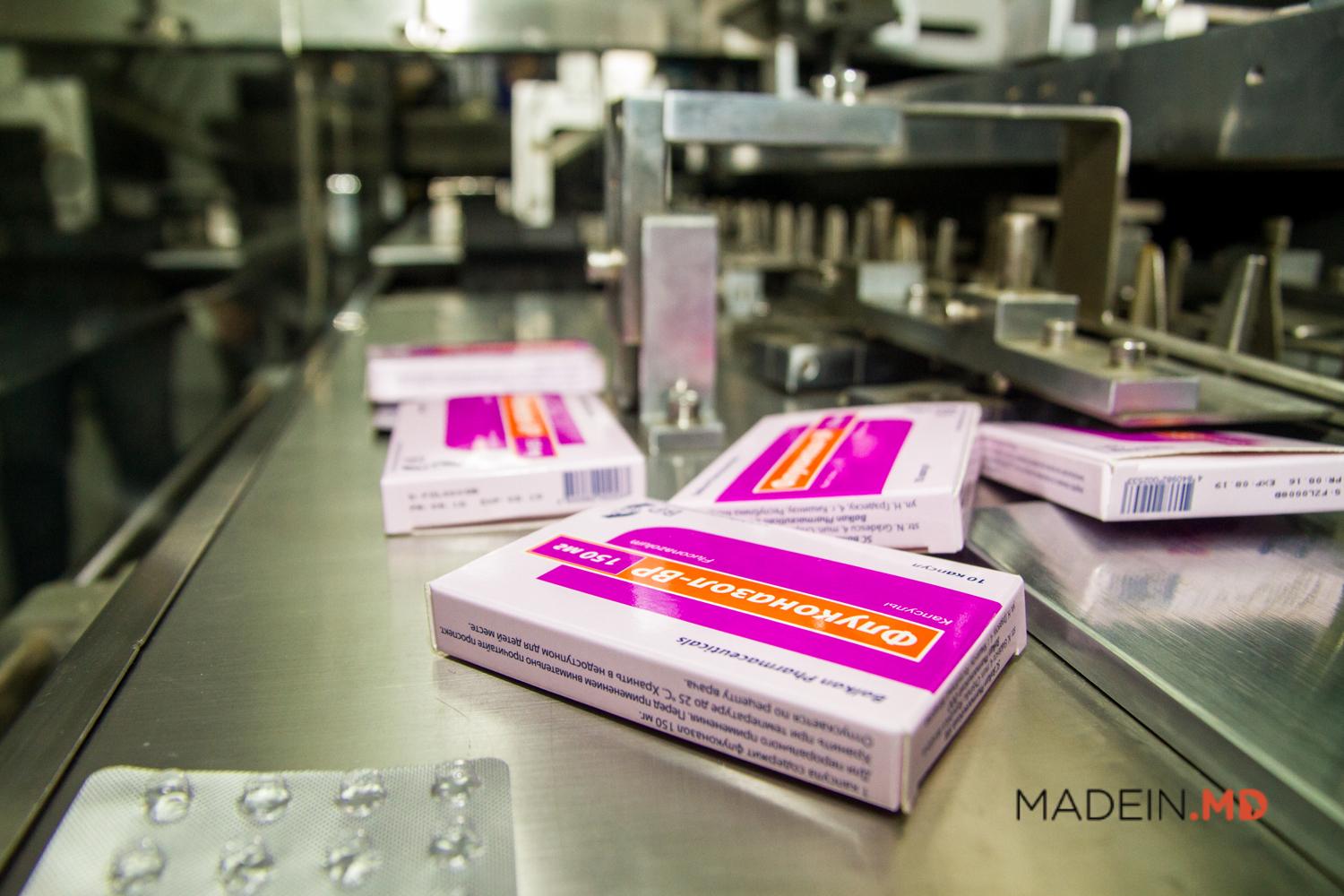 Sterile solutions and their preparation

Our trip continued in the department, where sterile solutions are made for their subsequent transfusion into ampoules. Here is a device, manufactured by Santorius company, one of the most popular manufacturers of equipment for pharmacological companies. They have about 500 inventions in this field. This device is equipped with a sterile bag and mills, which are activated by a magnetic stirrer equipped with scales.

After preparation, the solution passes a three-stage filtration, and then it passes to the filling station through a special tube with a peristaltic pump. Here, the solution is pumped out and passes through three filters to be checked for integrity. If at least one is not in the correct position, then the process is repeated. 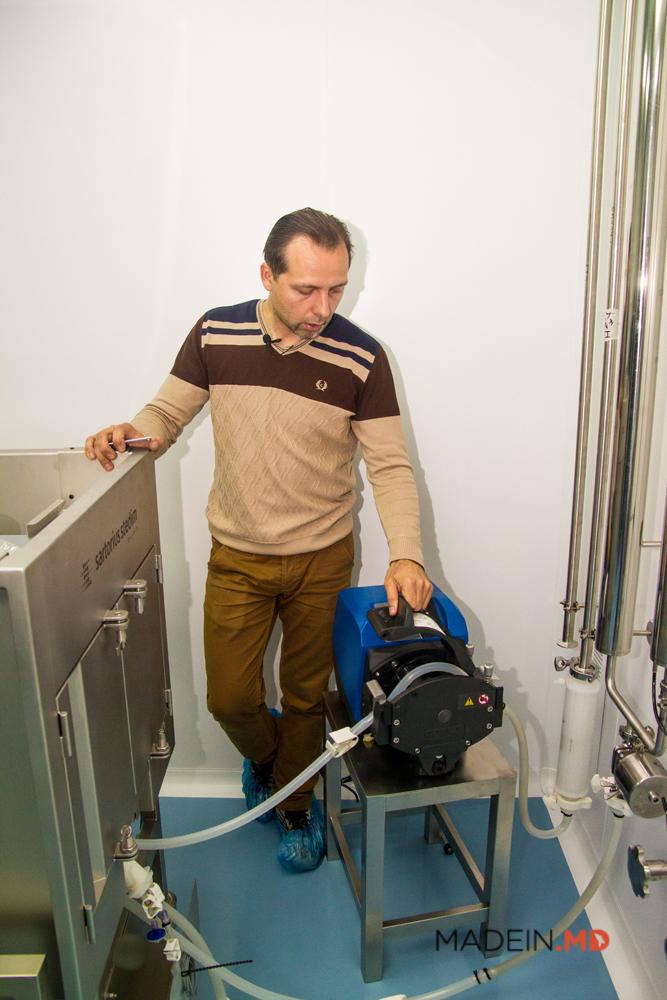 In another department there is a washer of vials. Initially, they pass through water, then through an ultrasonic bath, and then a few needles spray the bottles from the inside with distilled water. After all is pollinated by clean air, the bottles are placed in a sterilization tunnel.

It should be noted that there are three types of vials: simple (white), darkened (which must be protected from sunlight) and acid-resistant. In the latter category, the period and temperature of sterilization is different. 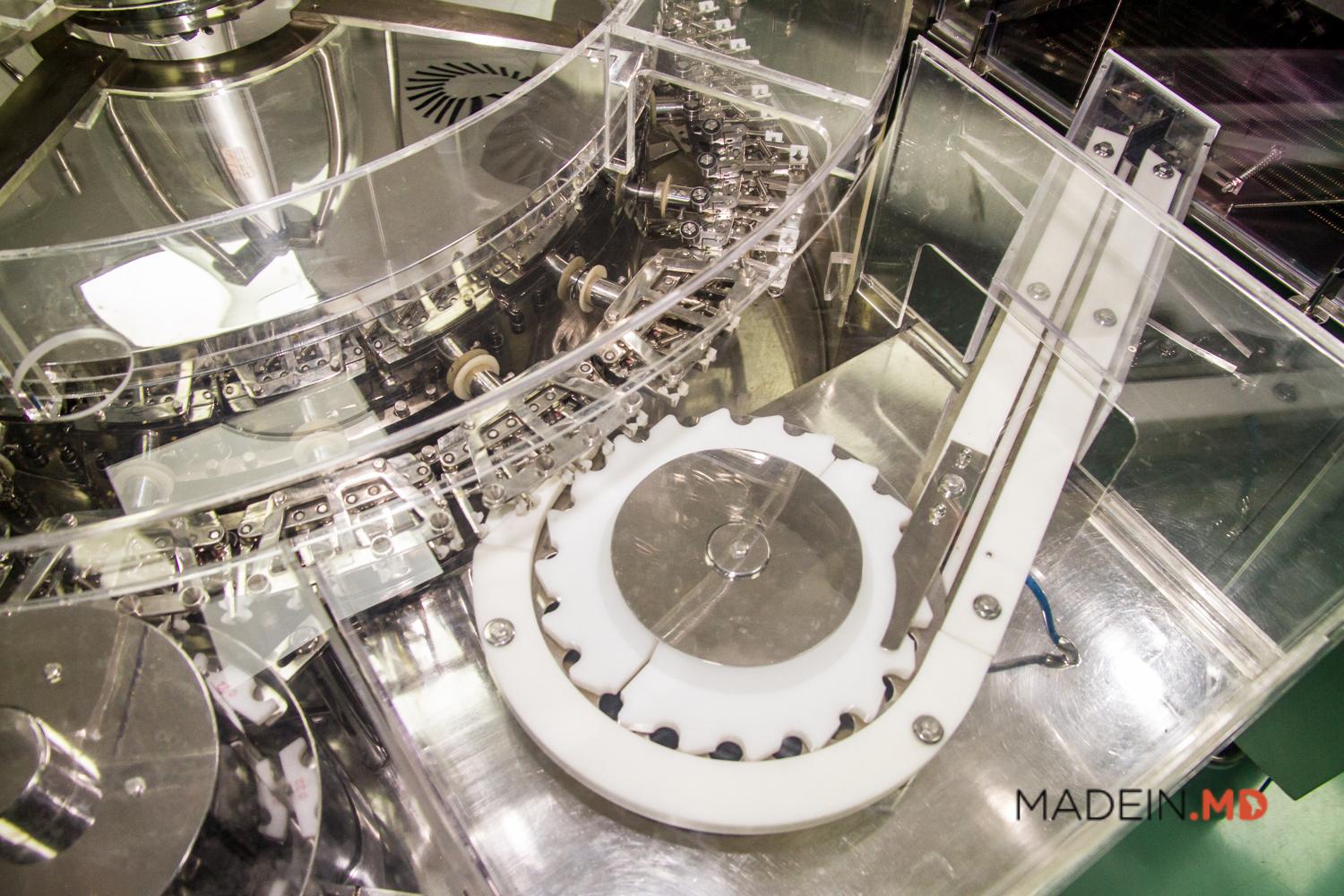 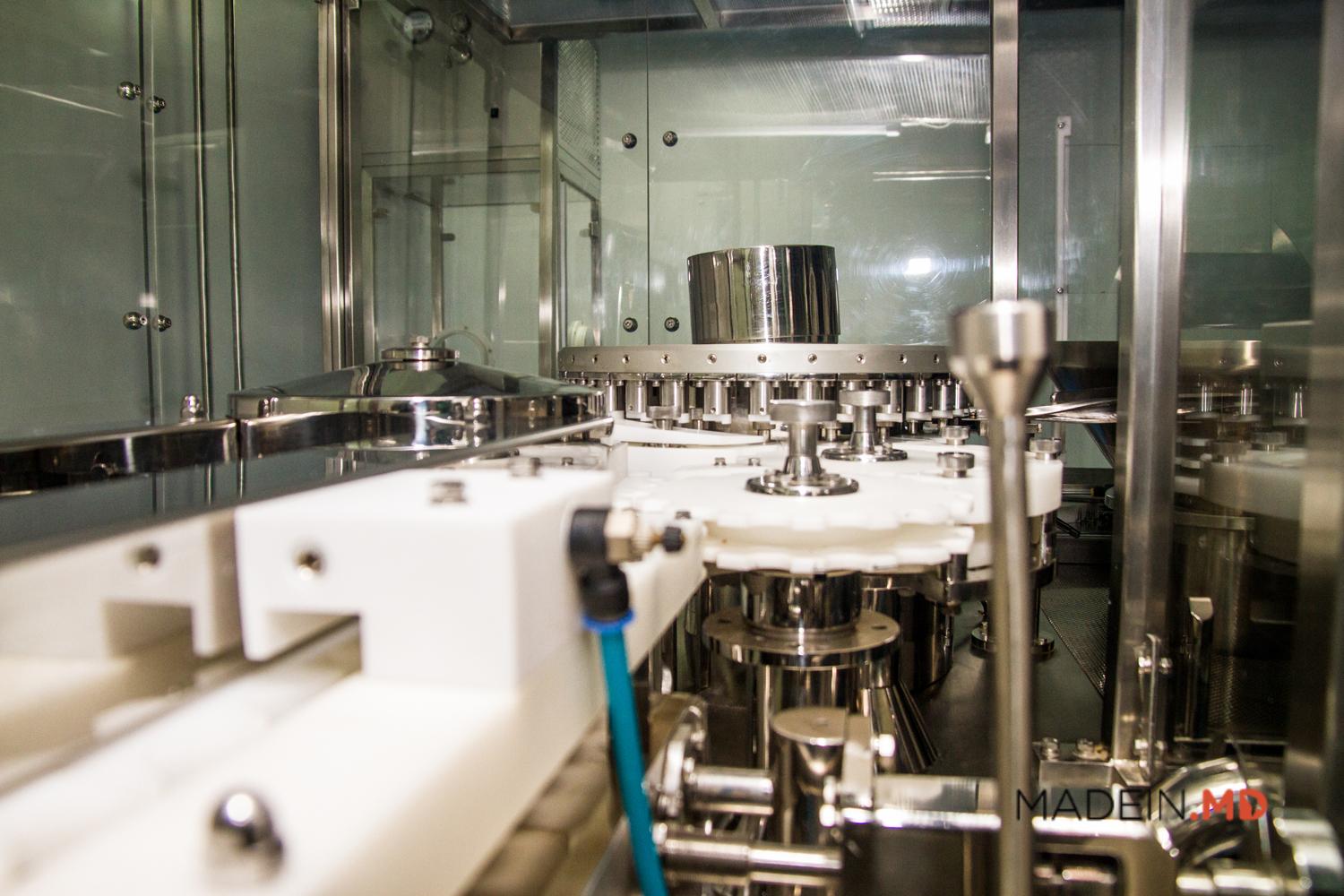 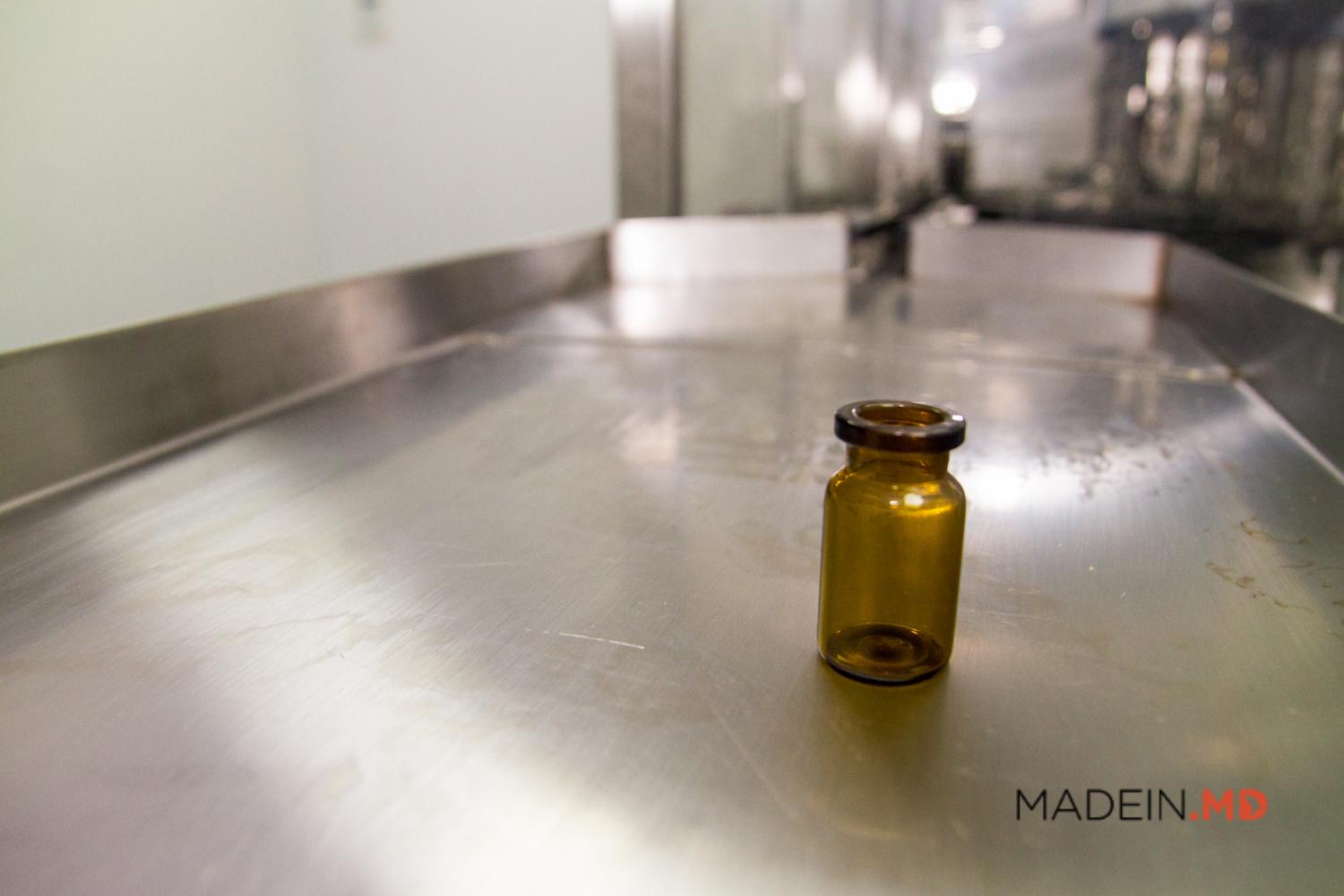 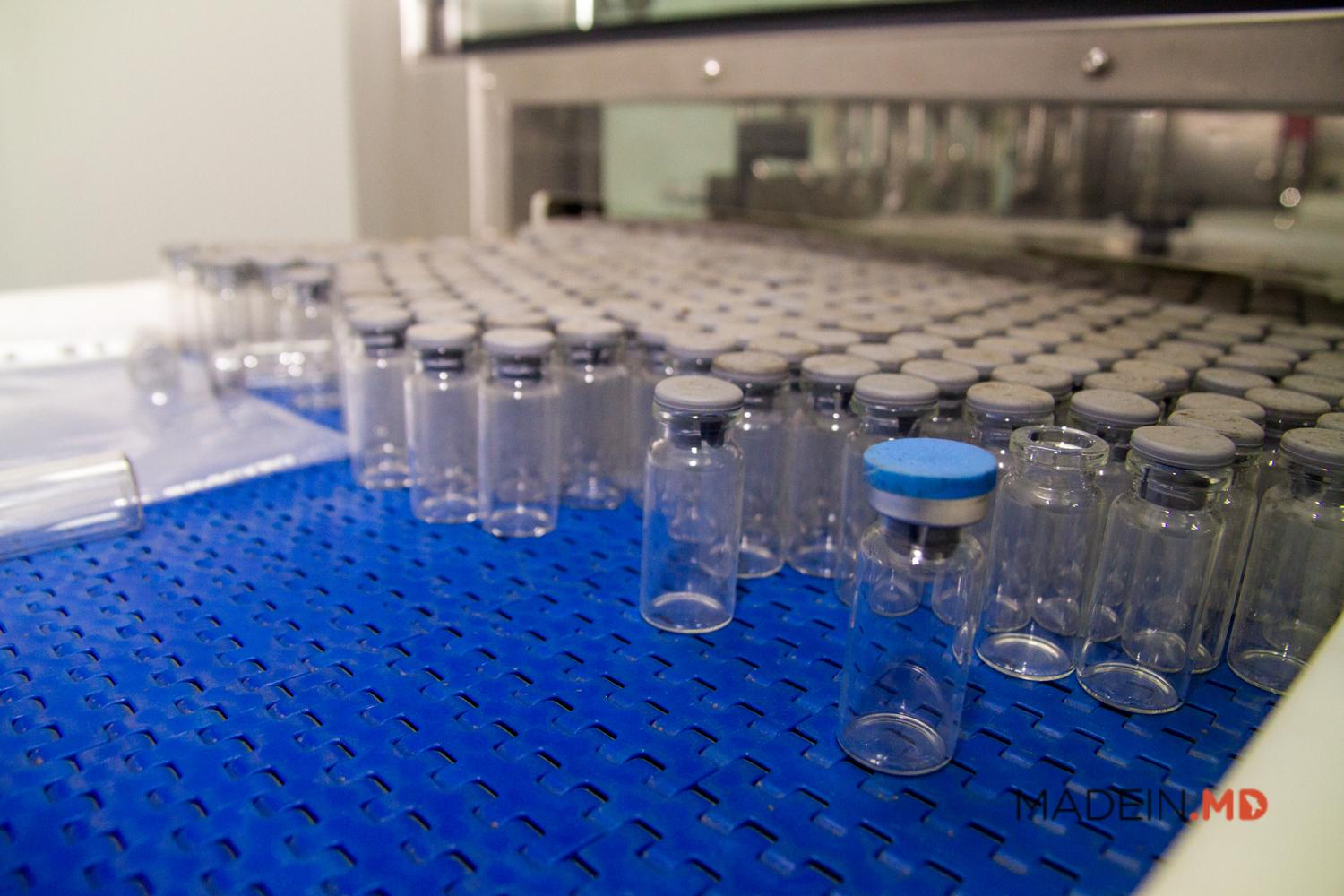 Our trip continued in the department for filling vials and ampoules. This department has the higher class of cleanness in the factory. The workers in this department have three layers of protective clothing. Here is a device contains a number of gloves that allow you to work inside. It also contains three sensors, which, when the door is opened, automatically stops the device. The vials are placed on a special stand and a sterile solution, which will then be used intramuscularly or intravenously, is injected into them.

If necessary, some solutions pass through a device which turns the liquid solution into dust. This is a long and complex process, which lasts from 12 to 24 hours. This occurs in cases where the solution is not stable and is preferably produced as a powder. 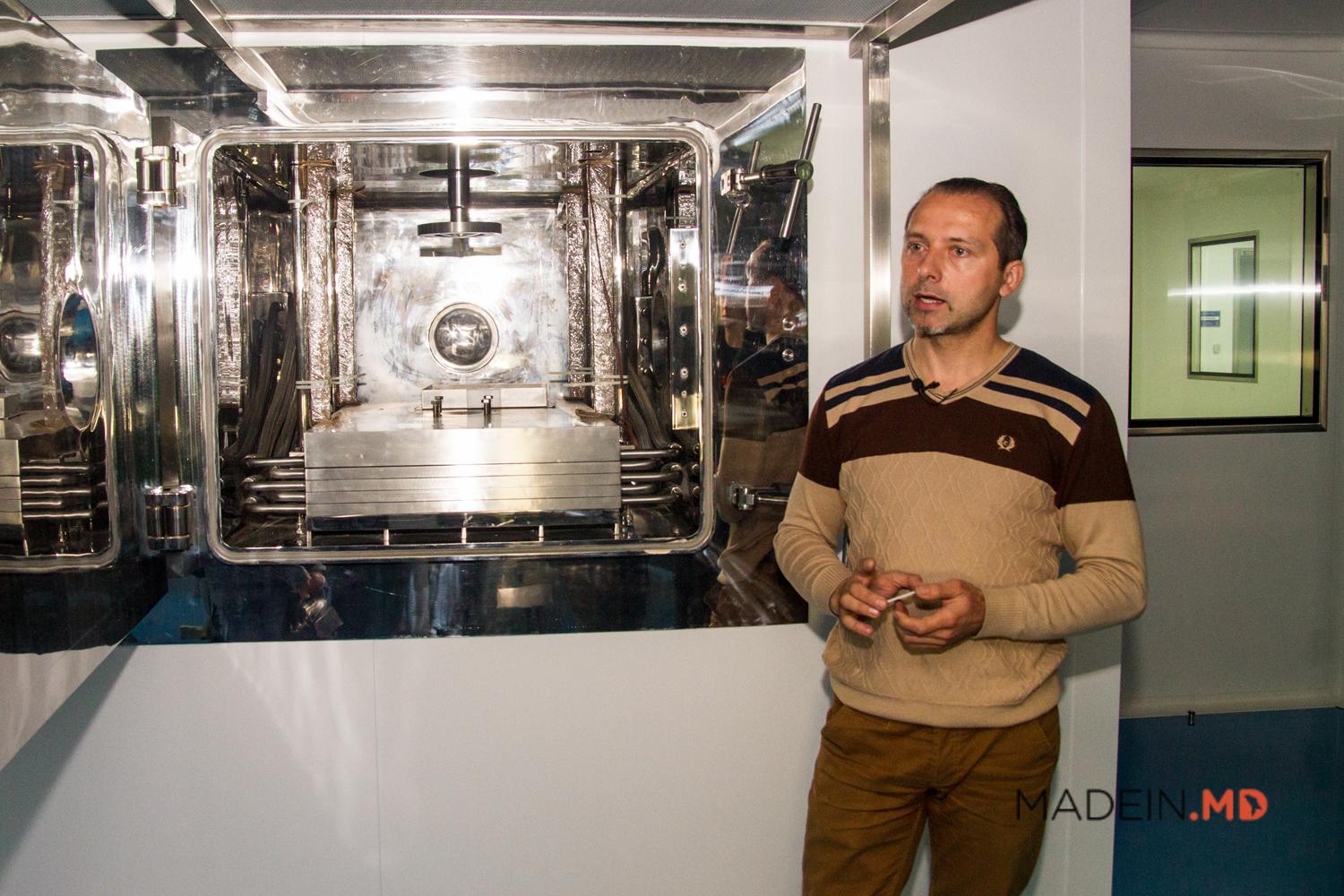 The last step is sterilization of lids and their installation on vials. Initially they are fitted with rubber caps, which are then fitted with safety caps made of aluminum.

We would also like to note that most of the devices and equipment in the factory are assembled by a Chinese company, but the components may belong to different brands, such as Bosch, Siemens, etc. 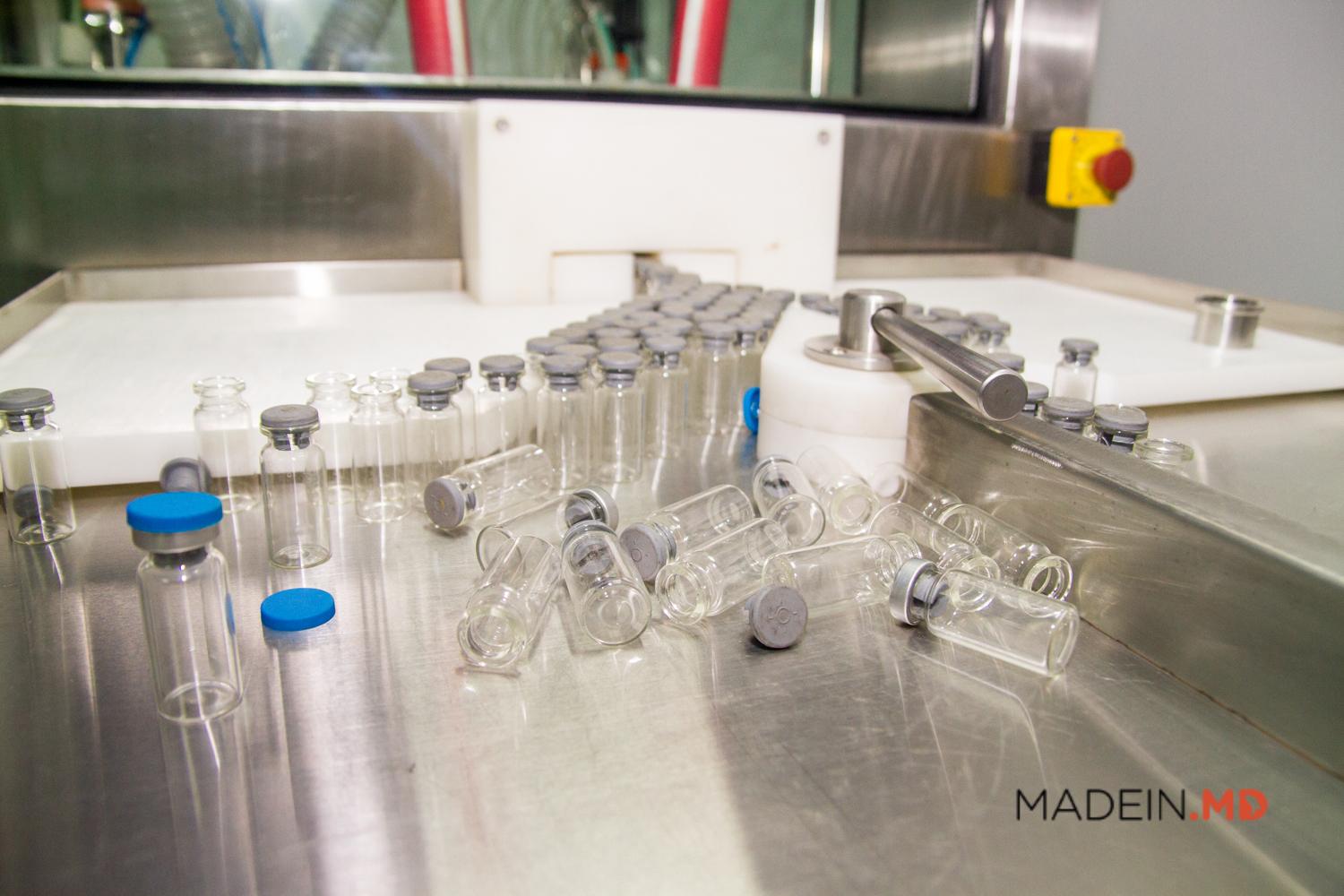 The application of Good Manufacturing Practice Standards (GMP) is the most important part of the quality assurance system. This system ensures that pharmaceutical products are consistently manufactured and controlled by quality standards suitable for their intended use and in accordance with the requirements of the registration certificate or product specification.

The company Balkan Pharmaceuticals has already implemented GMP regulations for a number of CIS countries (Ukraine, Kazakhstan, Uzbekistan, etc.), which allows it to export medicines to these countries.

However, the building of the factory in Sangera was required by the European standards of GMP, as their implementation opens many new opportunities and markets for manufacturers of pharmaceutical products.

For example, one of the regulations of the European GMP standard is that a factory or production complex should be located outside the city in an ecologically clean area. In addition, all sterility rules, separation of departments according to cleanness classes are also provided in the provisions established by the GMP. Ingredients used in the manufacturing of medicines are imported from countries that have also implemented the European GMP standard.

It was interesting to discover that in the new factory in all departments there are surveillance cameras. It also strictly complies with GMP standards. Thus, the European comission for GMP representatives has unlimited online access to these cameras and the manufacturer must strictly comply with all the rules for obtaining the relevant products. 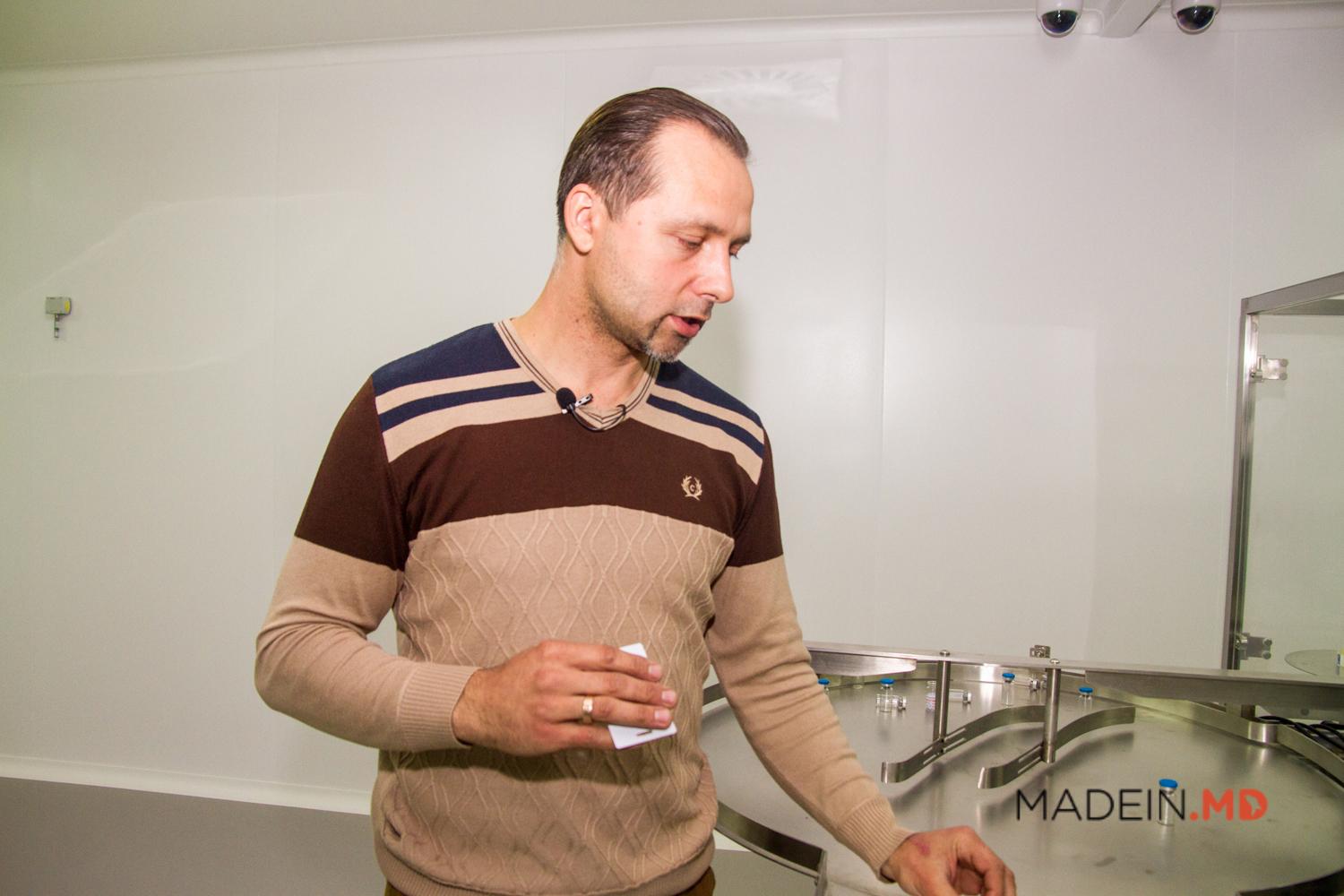 We had an opportunity to see for the first time how the pharmaceutical products are manufactured and found that this is a rather complicated process that depends on a set of rules and regulations that local manufacturer Balkan Pharmaceuticals has already complied with.

The company's products undergo all necessary checks to provide consumers with high-quality medicines. Currently, they are available in almost all pharmacy chains in the country and the company also works directly with many hospitals, clinics and diagnostic centers of the country.

Most of the employees of the production department from Chisinau will be transferred to the new factory. It is expected to have arround 400 employees. Iulian Buga stressed that the factory is already ready for work and in the near future will start producing medicines. Congratulations and good luck!